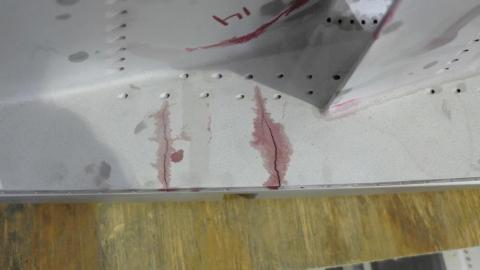 Nozzle repair is something that combustion Turbine Operators Task Force (CTOTF) group members are very familiar with. At this year’s spring conference, CTOTF invited Aaron Frost, Technical Director at Allied Power Group, to go into the details of 7FA Stage 1 nozzle repair. He warned the audience that the new 7FA.04 has lots of cooling holes and is made of GTD-111 material that is essentially unweldable.

For the 7FA+e (now 7FA.03), he has observed an abundance of cracks, most of them where no thermal barrier coating (TBC) was originally applied by the OEM. But as the price of new Stage 1 nozzles has come down by more than half in a decade due to far more aftermarket competition, it has gotten to the point where some are calling the cost of a weld repair into question from an economic standpoint. Some are even going to a braze as it is a cheaper fix, but not nearly as effective, said Frost. “There are future service life benefits in doing a weld rather than a braze,” he said. “Welds repairs on nozzle cracks hold up for many years without issue (see photo A). With braze, the cracks reappear relatively quickly and the brazing then leads to more cracking.” This was supported by numerous documented field experiences (see photo B).

Part of the braze repair problem, he believed is that the aerospace alloys used in many brazes do not always translate over to the industrial turbine field due to different material design characteristics. Most brazes are a parent metal powder with a low melting-point braze filler. One example of this is Mar-M-509, which is an aerospace cobalt-base alloy which was altered by a major OEM to create ECY-768.  Another example is Rene 80, which is a nickel-base alloy which was also altered by a major OEM to create GTD-111.

Some aftermarket vendors claim that some of these brazes are better than welds using Mar-M-918 Modified. But when you look closely at the Low Cycle Fatigue (LCF) data, said Frost, only in the lowest strain ranges does braze joint testing fail in the parent material or not at all. At all medium and high strain ranges, he said, a weld was statistically better in every case.  Photo C (post analysis of failed test bar with all one side Mar-M-918 Mod.).

“You can’t draw any conclusions on the weld vs. braze debate without a lot of (Photo C: Post analysis of failed test bar with all one side weld)

LCF data.” Frost pointed out that LCF testing is expensive and has a 5X scatter band at the same testing condition on new metal. A minimum of 12 LCF test bars would be needed at each strain range to have a reasonable confidence in the average cycles to failure for a given material or process.

“Much of the testing I see that concludes brazes are better than welds avoids high strain range LCF testing.” Frost gave the attendees plenty of other tips like new casting quality might mean far more nozzle cracks in some part number series than in others (photo D);

Frost pointed out that thicker TBC or uncontrolled application methods (manual vs. robotically sprayed) produce earlier spallation results. “A thinner TBC which is stays on is better than no TBC or patches of lost TBC which creates turbulence”.

Frost complained about pricing pressures affecting repair quality. This can lead some to cut corners such as only doing only visual inspections which is simply not enough. Overall, he considered the 7FA nozzle to be a robust design and recommended welds using Mar-M-918 Modified. He also acknowledged that it is the users that are willing to work with non-OEM shops to extend repair and life limits beyond OEM expectations.