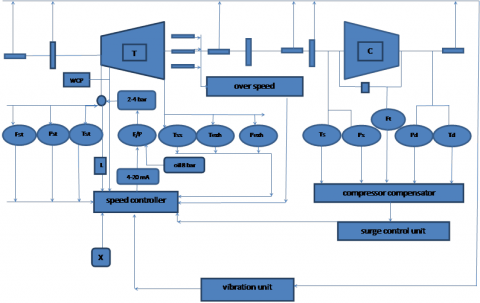 This is the first of a three-part series by the author. This article explains surge phenomena and discusses why the anti-surge protection system is a very important part of a compressor.

It is a phenomena accompanied by centrifugal compressors having continuous flow rate, gas path inside compressor flows having an acceptable value of eddies and vortices but if these eddies and vortices exceeded the acceptable design limit that case will be called rotating stall and flow separation will take place decreasing static pressure causing reversal gas flow leading to high temperature and noise due to friction taking place between gas and stationary parts of compressor.

1) Rapid rise in discharge pressure of compressor to a value higher than normal value.

2) Reversal flow of compressor back from downstream accompanied by high noise and vibrations amplitudes.

3) Increase in gas temperature due to friction of reversed gases and in path gases.

4) Decrease in suction pressure of compressor.

For a steam turbine operated compressor

These actions will take place before steam turbine reach maximum speed and over- speed trip where after over-speed trip the turbine will under come high thermal stresses and can reach higher critical speeds that should be overcome with an extra flow of steam which will not be found as boiler capacity will not cover it. Also to overcome choking of compressor due to huge rise of rotating speed.

Anti-surge protection system is a very important part of compressor but it is not presented in anti-surge valves only but it contains a several devices that integrate all together to give an output which is the safe protection set-point for machine.

Anti-surge protection system has several points of control in other words its degree differs according to number of parameters measured and integrated processed data together to obtain the final result which will be applied as an action.

In the next part, the author discusses the parameters affecting the anti-surge control systems, the types of ASCS, explains their advantages, and elaborates their uses.

(The author is Turbomachinery Manager at Abu-Qir Fertilizers Company in Alexandria, Egypt. He has a Masters Degree in Mechanical Engineering.)