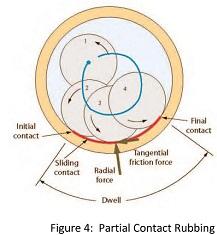 Back to Basics – Rubs II

In the first part, the author reviewed the basic concepts of rubs, symptoms that indicate a rub, and some definitions. In this article, he discusses partial contact rubbing and dynamic stiffness.

The mechanism of a partial rub usually involves a temporary, sliding rotor contact with the stationary part. During some part of its vibration cycle, the rotating shaft approaches the stationary part. While the stationary part has zero velocity, the shaft surface velocity is non-zero. The shaft contacts the stationary part and maintains contact for some period of time determined by the dynamics of the situation. Due to the tangential friction force, a rub will always add a certain amount of localized heating to the rotor which will bow the rotor.

At some point, the rotor breaks contact with the stationary part and moves away to complete the vibration cycle. During the next vibration cycle, the rotor repeats the process. Partial radial rub involves repetition of this process. The period of time during which the rotor maintains contact with the stationary part is called the dwell time (Figure 4). Local friction forces can be quite high and generate sufficient local heating to cause rotor bowing, severe wear, local melting or welding of the contacting surfaces, or plastic deformation of the shaft.

A rub will change the synchronous (1X) behavior of the rotor system and will also change the dynamic stiffness in complex (non-linear) ways. Contact can also be either a “dry” rub or a “lubricated” rub. Typically, the point of contact for a dry rub, with dissimilar stator and rotor materials, will wear rather quickly and the rub will “clear” itself is a short period of time. A lubricated rub can exhibit very slow wear and persist for an extended period of time. There are several symptoms that indicate that a rub is occurring:

·         High 1X vibration amplitude while trying to pass through a critical speed.

Remember that vibration displacement (mils peak to peak) is the ratio of the input force to the Dynamic Stiffness of the rotor system:

Rubs produce nonlinear changes in both the force and the Dynamic Stiffness, so the rotor dynamics of rub can become quite complicated.

When a rub occurs, contact forces suddenly appear and disappear. As the rotor contacts the stationary part, the stator pushes on the rotor while the rotor pushes in an equal and opposite manner on the stator. This contact force can be separated into radial and tangential (frictional) components. When contact occurs, the radial force acts in the direction of the rotor center to strongly accelerate the rotor away from the contact point. The radial force changes during the dwell time of the contact period and is proportional to the instantaneous radial acceleration, a, of the rotor (F = Ma).

During the period of contact, the tangential friction force appears which is proportional to the magnitude of the radial force and the coefficient of friction at the sliding interface. The tangential friction force acts opposite to the surface velocity of the shaft. It produces a torque on the rotor and, at the same time, tries to accelerate the rotor centerline in the reverse precession direction. For this reason, a rub will produce reverse components in the full spectrum.

Rubs produce changes in both the forces acting on and the Dynamic Stiffness of the rotor system. Because a rub involves rotor interaction with a hard constraint, a rub also introduces nonlinearities in the rotor system. The result of these effects is a complex rotor dynamic response that produces a wide variety of symptoms. Like most malfunctions, diagnosis of rub involves correlation of different types of data. It is important to look at steady state and transient data, including direct orbit and time base plots; full spectrum, including full spectrum cascade and waterfall plots; 1X Bode and polar plots; and average shaft centerline plots.

The frictional forces that are present during a rub produce local heating of the surface. If, at a steady operating speed, a rub occurs repeatedly in the same place on the rotor, the frictional heating of the surface and associated thermal expansion in that area will cause the rotor to bow in the direction of the rub contact. This bow effectively changes the unbalance magnitude and direction, which changes 1X rotor response. Under special circumstances, the local heating due to a light, 1X rub can produce a continuously changing 1X response vector.

• Unit Tripped Due to High Vibration at Bearing #1

• Source of the Rub

• Source of the Thermal Bow

Richard Thomas has over 38 years of rotating equipment experience in industry and currently holds the position of Prinipal Engineer for Metrix Instrument Company. Prior to his current position, his work experience included 11 years as a rotating equipment engineer in the petrochemical industry; 17 years in the Engineering Services Department of Bently Nevada Corporation; and 6 years as the Global Services Manager for RoMaDyn Corporation.