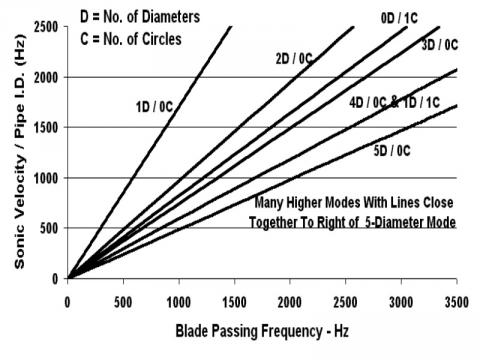 This article applies to centrifugal and axial compressors. Reciprocating, screw, and scroll compressors and ejectors have different considerations. For “dynamic” radial or axial gas compressors the predominant noise source is rotating blade passing frequency. There is also noise due to flow turbulence and vortex shedding from stationary vanes and rotating blades. The blade passing frequency is due to interaction of non-uniform flow. Noise levels increase as power increases, but especially as equivalent tip speed goes higher. Operating far from design point can also increase noise levels due to poor blade incidence angles.

Upstream inlet and return channel vane wakes do not cause high interaction noise in centrifugal compressors as there typically is fairly high separation and thus upstream wake reduction. However, downstream diffusers can sometimes have vanes that are close to impeller tips.

Potential flow interaction is a mandatory design consideration for structural vibration of both the rotating impeller and diffuser vanes. In addition, the interaction can greatly increase acoustic pulsations with noise increase up to 10 dB at rotating blade passing frequency. The acoustic pulsations rotate with diametral patterns depending on numbers of upstream and downstream vanes, and can excite acoustic modes of the gas within the compressor – see previous blog article: “Can High Noise Levels Cause Fatigue of Covered Impellers?”

Most compressor casings for process plants are not treated for noise unless there is a low noise guarantee especially for residential boundary limits. Removable, reusable, weather and oil-proof acoustic blankets are an option. For very low noise cases noise barriers are an alternative to high-maintenance enclosures especially for hazardous gases, thus avoiding fire detection and suppression. There is no need to treat the casing if inlet and discharge piping is not treated with insulation and jacketing, overlapping and banding in-place as described in references.

For centrifugal compressors discharge piping noise can have a large increase due to resonance of acoustic modes of the gas within the pipe.

Figure 1 has a plot for modes using the constants plotted with sonic velocity Vs blade passing frequency.

In Figure 2 the 2-diameter mode shape is shown.

Lower mol weight gases are more likely to have resonance of the lower modes that are more easily excited by blade passing frequency.

In addition there can be resonance of piping structural modes with blade passing frequency.

Where: Fn is natural frequency in Hz for mode with “n”-diameters

Common modes shapes for both the gas inside the pipes and the shell modes are possible and can lead to even higher noise and potential fatigue of pipes. A case of high noise causing piping stub out failures from operating on the verge of compressor surge is described in Reference 3. The last stage impeller revision changed the modes to much higher order and greatly reduced noise, along with not running at flow rate very near surge, the initial cause of piping failures.

For axial compressor typically with many more blades frequencies are much higher and resonance of higher-order modes is not an issue. For industrial axial compressors as for gas turbines, open-air inlets filters that reduce noise somewhat along with dissipative silencers are needed. Orientation for inlet silencers must assure the insulation cannot become wetted from rain.

Discharge silencers are an option as well if the gas is clean. Some centrifugal compressors utilize standard discharge dissipative silencers using insulation within perforated walls, or the Helmholtz resonator method, patterned after US Patent 4411592 – Pressure Variation Absorber. However, the process gas must be clean such as for natural gas pipeline compressors as both types utilize small holes that can become fouled from particulates and thus blocked from allowing sound waves to enter the device.

Besides compressor noise, vortex shedding and other acoustic pulsations such as from valves are potential causes of piping fatigue. In Reference 7 is a quotation from a technical group covering aspects of piping failures. “Failures of piping in the hydrocarbon industry represent a potential for catastrophic accidents in terms of both lives and dollars lost. It has been reported that over 20% of the piping failures in the UK sector of the North Sea were due to piping vibration and fatigue failures. It is clear that AIV is a serious risk since a single failure will often shut down a facility for hours or days, resulting in lost production, at a minimum.”