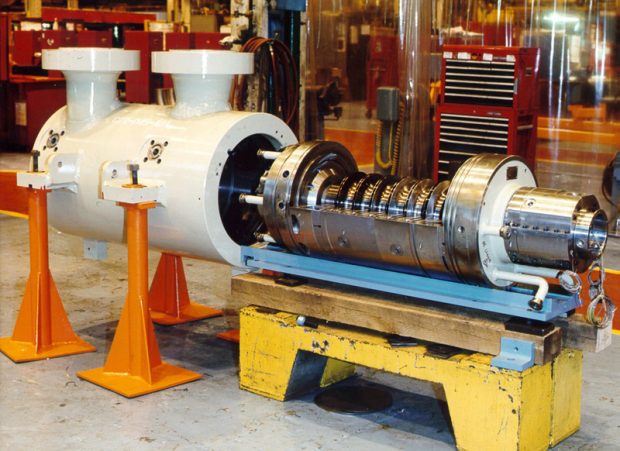 A constant speed electric motor driven compressor, controlled by a suction throttle valve, provides a simple solution. The startup controls are relatively straightforward and there is no warm-up sequence, as might be needed in a steam turbine. No over speed protection is needed. However, the cost of electricity can be relatively high and throttling inherently wastes energy. Therefore, constant speed electric motor driven compressors with throttling used for control are not necessarily the most energy efficient, but are simple to start and operate.

Applications using turbine driven compressors are usually more efficient than throttled compressors because of the losses associated with throttling. The machine speed is varied until the flow requirement at a given pressure ratio is met. However, turbines (gas or steam) require complicated start-up and warm-up sequences. Over speed protection controls are also required on turbines.
Variable frequency drives (VFD) provide an efficient means for starting and controlling the speed of an electric motor. As technology improves, such drives have gained in popularity. Grounding and harmonic vibrations are some of the main issues associated with VFD’s. Electric motors can also vary the drive speed through a fluid coupling.
Guide vanes are used in the fluid coupling to control the amount of transmitted torque. By varying the torque to the compressor shaft, speed can be controlled. Closed loop speed control greatly improves the response time and accuracy of this throughput method. Absence of speed control leads to the compressor operating at fluctuating speeds as the load changes, and thus results in poorer quality of throughput control and possibly a negative impact on the capability of the antisurge control to protect the compressor. Drawbacks of this approach are loss of efficiency and increased machine complexity.
featured newsletter
Share Tweet