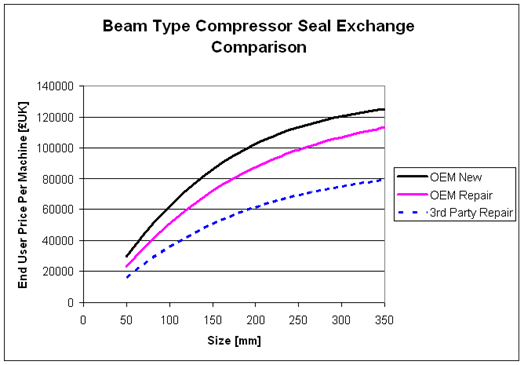 RIGHT FOR SOME PROCESS GAS COMPRESSORS AND WRONG for OTHERS
By Chris Carmody & Heinz P. Bloch

It is not unusual to find large process gas machines still in service four or more decades after commissioning. Many continue to operate well with wet seals as originally specified.
However, dry gas seals (Figure 1) are prevalent in new installations. DGS support systems are less elaborate and less expensive than older systems that almost always use oil as a coolant or separating layer in the narrow clearance between stationary and rotating seal components.
Dry gas seals are mechanical face-type seals available as single, double and tandem models. On existing installations with wet (liquid) seals, the cost of the seal-oil-supply system had been part of the physical asset acquisition. The original seals and support systems merit replacing only if they are troublesome and if good experience references are available for dry gas seals in the same service.
These days, DGS are favored in most, although not all, applications due to several factors. Wet seals experience high-seal oil consumption. When new, this is about 5 gallons per day (gpd) per seal. After a year, oil consumption rises as high as 20 gpd. Even with lube-seal systems, at least 2 gpd are lost into the compressor on an average-sized machine. Contaminated lube oil may damage compressor bearings.

Wet seal systems
Wet seal systems require more operator attention due to the need for more physical inspection. Incremental energy requirements due to parasitic losses on wet seals are typically ~30 HP on 10,000 HP compressors. Adding seal oil pump energy demands (~35 HP) will increase the increment energy consumed to ~65 HP.
Hydraulic surges are a potential hazard on wet-seal systems, some more so than others. This can lead to seal-face damage and reduced component life. Manufacturers rarely mention this risk and seldom size the oil accumulators properly. Even then, bladder-type accumulators tend to become frequent maintenance items — partly due to internal gas leakage and elastomer failures.
Wet seal bushing life is about two to four years on average, although some wet bushing seals reach six years with well-designed late-generation components. Seal bushings wear due to microscopic abrasive particles that accumulate at the bushing seal edge and grind the shaft mechanically.
Experience points to the advisability of precautionary repairs on every second major maintenance intervention. At that time, the complete rotor must be removed to repair damaged shaft regions, even if the shaft is hardened (It should be noted that late-generation Isocarbon liquid film face seals do not have this problem).
With some wet seal systems, four pumps inspect and maintain on each compressor lube/seal oil skid; two are seal-oil pumps and two are lube-oil pumps. Significant gas leakage losses to flare from the sour seal oil traps should be considered.
Unless a flare gas recovery unit is available, or the gas is re-introduced at the compressor suction, gas losses can be as high as 30 times the equivalent dry gas seal loss. Up to 75 scfm per seal have been reported for a 10,000 hp compressor in average condition.
Instrumentation complications can also exist with wet seals because of the many control devices needed. The cost of instrument maintenance, too, can be high.
Troubleshooting oil seals, therefore, requires a qualified engineering or technical staff. Experience shows that seal oil system design, installation and maintenance problems are not always resolved. Constant vigilance is required. Dry gas seals, on the other hand, require lesser skills.
Contamination of the process gas path is frequent and can become a burdensome cost. On a per-compressor basis, the yearly reduction in efficiency of heat exchangers on a propane system can add $50,000 to $100,000 to operating expenses due to cooling losses.
For compressors equipped with bushing-type seals, no backup seal is available in case of power outage. Consequently, emergency power is required for safe operation or an immediate shutdown is required. Dry seals have a safer record in this regard due to the availability of secondary sealing.
The footprint needed by wet seal auxiliary systems is relatively large. The compressor skid for machines equipped with gas seal systems is physically smaller and less expensive.

Gas seals
Gas seals have many functional similarities with their predecessors that include variants of face, bushing and floating ring seals. Yet, there are also features that differ. The seal face of the rotating mating ring can be divided into a grooved area at the high-pressure side and a dam-area at the low-pressure side.
The shallow grooves are often laser-etched, spark-eroded or chemically milled. A typical depth is ~0.0003 inch. T-shaped, V-shaped (bi-directional) and L-shaped (unidirectional) grooves have been produced; each configuration has its advantages and disadvantages. A stationary sliding ring is pressed axially against the mating ring by both spring forces and pressure exerted by the sealing gas.
The sealing gap is located between the mating ring and the sliding ring. For proper non-contacting operation these two rings must be separated by a gas film acting against the closing forces in the sealing gap. The gas film is achieved by the pumping action of the grooves and the throttling effect of the sealing dam. Groove geometry is critical for trouble-free operation of the seal.
The specification, review, purchasing and installation of a dry seal support system cannot be left to chance. A thorough review of the facility and the process unit may be the key to minimizing disappointments. Several factors should be considered when examining DGS support systems for centrifugal compressors:
Best available seal: Before opting for dry gas seals in retrofit situations, ask if the apparently flawed originally supplied liquid seals represent the best the vendor was able to offer. The claims of competing vendors and claims made for different styles of seals must be checked against actual experience. In some instances, these checks lead to the purchase of improved, late-generation liquid film face seals instead of dry gas seals. The areas of safety and reliability must always be given special consideration
Gas composition: Understanding the actual gas composition and true operating condition is often overlooked. It is also necessary to understand when and where phase changes start, and to ensure that condensing or condensed liquids are not allowed in the sealing gas
Control systems: Control system design must be understood. Is clean and dry buffer gas available at all anticipated compressor speeds? Is the seal protected from bearing oil? How is the compressor pressurized or de-pressurized? How is the machine brought up to operating speed and how will the seal react? Are all operating and maintenance personnel fully familiar with the compressor maintenance and operating manual? Is the full control system included and adequately described in the manuals or write-ups? Are the key elements of the system design understood and do they include buffer gas conditioning, heating, filtration, regulation (flow versus pressure) and monitoring?
Safety and reliability
Positive sealing of the compressor during emergencies must always be assessed. In case the gas pressure in the compressor casing exceeds that of the seal oil pressure, shutdown pistons in face seal assemblies exert a force proportional to the gas pressure. This force keeps the seal faces closed and prevents gas release to the environment.
Dry gas seals may or may not provide positive gas sealing if the seal faces are damaged or distorted. The backup seal may show reasonable performance under low pressure but may fail to perform under higher pressure if the primary seal fails.
The alarm and shutdown devices of the seal oil system must be of reasonable range and sensitivity and provide reliable alarm and shutdown characteristics. Dry gas seal systems often rely on pressure switches of low range and high sensitivity. They might have the tendency to malfunction or give a false sense of security. Therefore, make sure the system will provide a sufficiently high degree of alarm and shutdown performance.
Some seal configurations excel at online monitoring. The favored seal must allow easy verification of a sound working condition. Beware of seal systems that are hampered by small diameter orifices that tend to plug. Also avoid sensitive pressure switches that can become inoperable.
As is the case with most other upgrade decisions, the user must go through a rigorous cost-justification analysis. In many cases, gas seals are a good choice only if an oil seal console will not be needed. If such a console already exists, it may be difficult to justify gas seals.
With hydrocarbon gas prices escalating, consider gas-leakage rates to justify a conversion to gas-lubricated seals. Not to be overlooked are advancements in traditional oil sealing technology for centrifugal compressors. Manufacturers are now marketing improved versions of the oil seals that were originally furnished with their compressors.
Along these lines, one researcher suggests studying the failure statistics of your oil type seals and comparing them with this: Current estimates of failure rates of gas seals are about 0.175 failures/year. That equates to a problem every six years or so. At least one dry gas seal manufacturer recommends maintenance intervals around gas seals on limits set by the elastomer aging process.
The following maintenance routine is recommended after 60 months of operation: Replace all elastomers, replace the springs, replace all seal faces and seats, and carry out static and dynamic testing on a test rig.

Informed choices
Here are some tips to help in making informed DGS choices: Consider gas seals only in conjunction with a clean gas supply. If your process gas causes fouling deposits, ask critical questions of anyone offering seals for that kind of gas.
If extensive micro-filtration is needed, factor in the cost of maintaining a dry gas seal support system. Look for seals that will survive a reasonable amount of compressor surging.
Consider dry gas seals that incorporate features ensuring start-up and acceleration to operating speed without allowing the two seal faces to make contact. Some manufacturers offer the option of repairing DGS systems from other OEMs (Figure 2). ■

Dr. Chris Carmody is Technical Products Manager at AESSEAL, a company that specializes in the design, manufacture and repair of mechanical seals and dry gas seals. For more information, visit www.aesseal.com