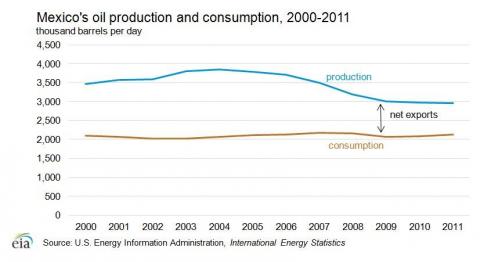 A recent meeting of the Manhattan Institute in New York, a distinguished panel of experts discussed efforts by Mexican legislators to re-write their country’s energy laws. The reform, to allow and encourage foreign companies to participate in the development of that nationʼs vast oil and gas resources, is among the signature acts early in the six-year term of President Enrique Peña Nieto.

Reforms already enacted and others pending allow, for the first time since the 1930s, private and foreign investment in Mexicoʼs oil and gas fields. This, according to Mark Mills, senior fellow of the Manhattan Institute, is intended to lead to an influx of both capital and technology that will boost domestic production, revitalizing Mexicoʼs economy and setting the stage for North America as a rival to the Middle East and Russia in world energy markets.

· Mechanisms for foreigners to bid on leases to explore and drill for oil, ending the 75-year Pemex (Petróleos Mexicanos, the state-owned petroleum company) monopoly

· Independent regulatory bodies for licensing, safety and the environment

“Reforms however will be a long and ardous road,” said Michelle Michot Foss, chief energy economist at the University of Texas, Austin. “Just the transitions for PEMEX and CFE are likely to encompass years. Ultimately these transitions will involve deep shifts in management and labor culture, and an evolution of practices that support commercially savvy, viable strategies and tactics. Elsewhere, rules and regulations, transparency protections and international best practices all have to be developed and implemented.”

All this is just the tip of the iceberg, added Foss. Foundation infrastructure, road networks, water resources, roads and harbors and telecommunications have to rise to the occasion.

Nevertheless, Mexico’s potential to raise revenue from hydrocarbon production is enormous. The nation’s oil and gas resources are estimated at 450 billion barrels of oil equivalent — comparable to the resource base of Saudi Arabia. The nation now operates fewer than 5% of the offshore rigs off Gulf of Mexico. And to date, only a several dozen wells have been dug into Mexico’s shale formations. More than 40,000 well were drilled into US’s shale formations last year alone, according to Mills.

In addition to Mexico’s oil and gas producing areas, such as Sureste, Tampico Misantla and Burgos, there are six plays with hydrocarbon potential, said Luis Labardini, a principal with Marcos Asociados, who served as senior advisor to PEMEX’s deputy director for trade financing. These include Baja California,Mar de Cortes, Chihuaha, Sierra Madre Oriental and Sierra de Chiapas Y Progreso.

Mexico’s new government says the new policy will boost production to 4 million barrels of oil per day in 2024. This is a reasonable goal and consistent with what is technically achievable.