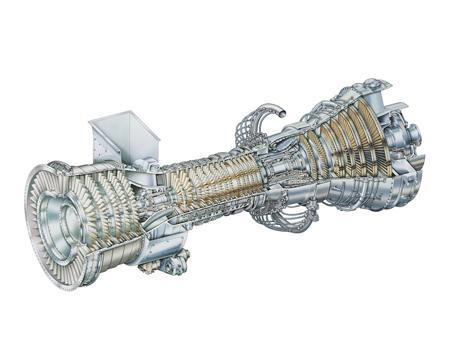 From 2001 to 2005, California experienced severe power shortages that led to rolling blackouts. This was a result of unwise electric energy policy, Enron energy trading fraud, and decades-long onerous restrictions on permissions for generating plants.

This worsened in 2005 and Californians had to endure sweltering afternoons for days. Consequently, permissions were granted for about 50 power plants, and 22 were installed within a year’s time.

Most of these were peaking plants, with low-capital cost, high-fuel cost, natural gas-fired, and had low emissions. They could be run for as little as two hours per day and had rapid load pickup, as fast as 50 MW in 10 minutes. Moreover, these machines didn’t require additional high-voltage lines and their footprint was similar to that of a substation, and they could be sited readily.

Around this time, GE rolled out CF6-80C2 turbo-fan engines for Boeing 747s, 767s and other aircraft. The engine could produce 72,000 pounds of thrust, was reliable and efficient, and its cost had fallen due to high-volume production. Its power rating was just right for peakers.

GE engineers saw this as a peaker application, which could also be used in high-speed ferries. Adopting the CF6 core technology, most of the parts were used directly in designing the aeroderivative LM6000PC SPRINT (Spray Inter-cooled Turbine). As a simple-cycle unit, it is rated at 48 MW. If the exhaust heat is sent to a steam boiler and this steam sent to a steam turbine with its own generator (combined cycle), it can generate up to 80 MW.

Designed for natural gas firing with turbine inlet temperatures of 1300ºC (2372ºF), engineers injected steam into the gas burners to keep NOx emissions down (Iron melts at 1200ºC and steel softens at 540ºC.) Further, the SPRINT system injected atomized water into the compressor to cool the air thereby reducing the power needed by the compressor, and provided more power to the generator.

As this unit was basically off the shelf, GE could deliver the turbine-generator unit within 70 days, and California’s companies snapped them up like hotcakes, with most orders going for peakers.

The LM6000PC SPRINT has a low-pressure compressor on the same spool as the low-pressure turbine and the electrical generator. This spool turns at 3600 RPM, providing 60-cycle power. It has a high-pressure compressor on the same spool as the high-pressure turbine turning at speeds up to 10,350 RPM. The two compressors produce a pressure ratio of 29 to 1. Air flow is 125 kilograms per second. Thermal efficiency is greater than 42 percent (simple cycle) and up to 55 percent (combined cycle).

This story has a happy ending. People in California can now stay cool on hot afternoons.