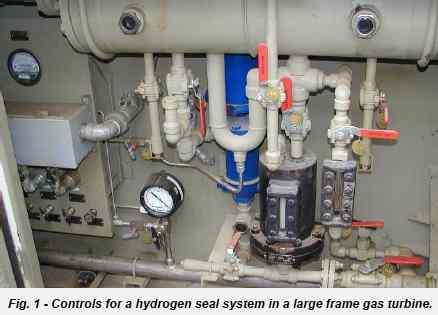 Hydrogen is the medium of choice for cooling about 70 percent of electric power generators over 60MW. It is more efficient for dissipating the heat load in generators compared to water, air or oil. Most large frame gas turbine models use hydrogen as cooling medium for their generators. Oil, often the same turbine oil used for bearing lubrication, is used as an occlusive seal to keep the small molecules of hydrogen gas from leaking down the shaft and out of the generator.
Seal oils face extreme conditions, and upon degradation may cause significant problems to seal systems leading to mechanical failure of the seals, loss of coolant, and possible safety concerns.

[*This blog is an excerpt from the whitepaper Innovative Solutions to Address Lube Varnish in Hydrogen Seals which covers some of the factors that lead to hydrogen seal failures and presents some solutions to address this problem. Request full 12 page .pdf copy of the Whitepaper here.]

All aspects of a turbine and generator design are continually evaluated by operators and OEMs alike to optimize for greater energy and cost efficiency. Hydrogen seal effectiveness, with significant cost implications, are no different. This has led to a shift in some seal designs from spring held seals with higher leakage rates, to a more rigid bolted seal design to maintain tighter clearances. Bolting the hydrogen seals prevents the seal from expanding with shaft oscillation or under thermal stress, resulting in better control of hydrogen leakage. However, the tightly maintained clearances of bolted seal designsare highly susceptible problems relating to varnish deposits.

Though other mechanical factors may often play a contributing role, there are two primary factors that lead to hydrogen seal failures. First is improper installation or establishing too low of a clearance. Second is reduced lube oil quality allowing degradation and varnish formation on the seal surface. Many gas turbines share the same reservoir for their seal and bearing lube oils. It is common to see oil degradation occurring in other parts of the system, with problems manifesting in the hydrogen seal areas as well. Regardless of the initial cause of the problem, lube oil varnish will accelerate the problem, increasing the chances of seal failures.

Effects of hydrogen seal deposits
Hydrogen seal issues are primary initiated by reduced clearances. This may be due to installation or deposit formation. The impact of reduced clearances and signs of impending seal failures are:
• Low seal oil flow – The typical flow rate in a large frame gas turbine may be 6-8gpm with total system flow capacity around 20gpm. Problematic seals may have flow rates between 1-4gpm.

• Increased seal oil temperature – Normal temperature of the seal oil is between 135-145°F. If the flow paths have been restricted, the residence time in the seals is longer resulting in higher temperatures. Problematic seals may expose the oil to temperatures well in excess of 200°F.
• Reduced hydrogen consumption, due to lower flow rates.

Hydrogen seal deposits range in severity. Below are several examples of problematic hydrogen seals. Hydrogen seal varnish can be classified as:
1. Incipient varnish – beginning of varnish formation
2. Propagating varnish – spreading widely of the varnish
3. Critical varnish – varnish is in danger of equipment reliability

Incipient varnish is a thin layer of deposits that are usually yellow to light brown in color. Typical clearances in the hydrogen seals is between 0.07”-0.12”. Even though these deposits appear to be a very thin layer, the depth of the varnish is sufficient to impact the dynamic clearances in the seals. Deposits may not be uniform around the entire seal surface, leading to areas of higher and lower flow and exacerbating problems.

Varnish deposits have been shown to have a wide range of chemistries and the typical chemistry of the Incipient Varnish in hydrogen seals can also be determined to have differences.

Propagating varnish deposits in hydrogen seals are usually darker in color and in a thicker layer which further disrupts oil flow. These deposits often include both organic and inorganic deposits because the temperature of the fluid, deposit and seal are higher causing additional decomposition chemical reactions to occur. In addition, the seal itself with the lubricant may now create new modes of degradation for the lubricant, such as cavitation. With Propagating varnish, often the surface of the hydrogen seal has seen mechanical damage and if not corrected, will lead to seal failure.

The operation of the seal is where oil is pressurized in-between two seals (C/E= Collector End toward the generator and T/E = Turbine End toward the turbine). The oil is drawn into the seal by the spinning action of the rotor shaft with the aid of this oil pressure. This action pulls oil into the seals and out toward each shaft end to prevent hydrogen from migrating through the seal.

If there is varnish on the seal there may be insufficient gap to allow… [Request full 12 page Whitepaper on Innovative Solutions to address Lube Varnish in Hydrogen Seals here.]