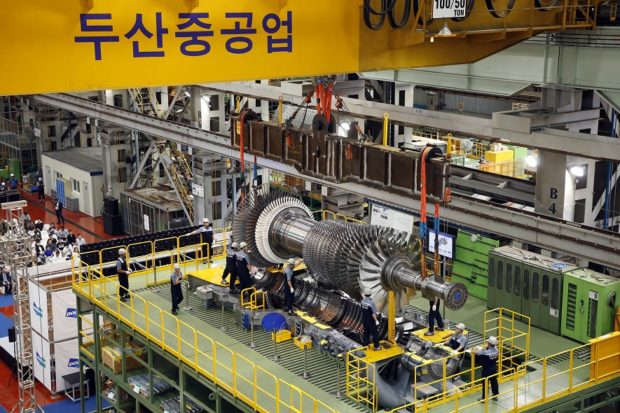 Doosan Heavy Industries & Construction has signed an agreement with Korea Western Power Company (KOWEPO) to supply a gas turbine to the Gimpo Combined Heat & Power (CHP) Plant. The construction of the power plant, which is to be located in Gimpo city of the Gyeonggi Province, is scheduled to commence in 2020 and will be completed by 2022.

In 2014, Ansaldo had signed a partnership with Doosan Heavy Industries of Korea. Ansaldo was to undertake an R&D technology cooperation initiative with the Korean group to develop a new gas turbine for countries with 60 Hz grids (North America, Brazil, Saudi Arabia, South Korea). The project received partial financing from the South Korean government.

With support from the Ministry of Trade, Industry, and Energy (MOTIE) and Korea Institute of Energy Technology Evaluation & Planning (KETEP), DHIC has been developing the large gas turbine for power plants as a national project since 2013. The company signed an agreement with KOWEPO for a demonstration project of the 270MW-class large gas turbine in December 2017 and completed final assembly in September this year. An in-house test of the product is currently underway at the DHIC headquarters in Changwon.

“This agreement is a significant outcome achieved through KOWEPO’s commitment and DHIC’s efforts to promote growth of the domestic gas turbine industry,” a DHIC official said. “Through industry-academia-research cooperation for gas turbines, we aim to develop a world-class, next-generation Korean model of the combined-cycle power generation system, so that we may achieve change in the domestic natural gas-fired power generation market, which has been largely dependent on imported products.”

The domestic gas-fired power generation market is expected to continuously grow. Taking into account the 8th Basic Plan for Electricity Supply & Demand announced at the end of 2017 and the plans for repowering old combined cycle and coal-fired thermal power plants, new construction of combined cycle power plants requiring gas turbines is expected to reach a scale of 20GW.