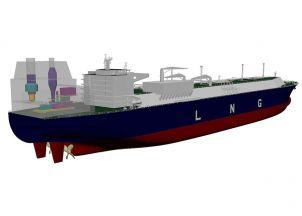 According to GE, AiP was sought from Lloyd’s Register because the LNG carrier is an innovative and novel concept not covered by traditional classification rules.

It is envisioned that the initial LNG carrier design will be built around a GE gas turbine-based COGES (combined gas turbine electric and steam) system that will feature a single 30MW LM series gas turbine generator set and one steam turbine generator-set for power production. The carrier will allow for flexible configuration of prime movers, offering a total installed power of 32MW to more than 50MW, including back-up, if required.

The gas turbines can be equipped with a GE Dry Low Emissions (DLE) or single annular combustion system – both capable of meeting Tier III IMO/Tier 4 US EPA requirements, operating on gas or liquid fuel, with no exhaust treatment and no methane slip.

Brien Bolsinger, vice president, marine operations, GE Marine, said: “With AiP in hand, we can now move into the final vessel design for construction and customers can feel confident in procuring a gas turbine-powered LNG carrier.”