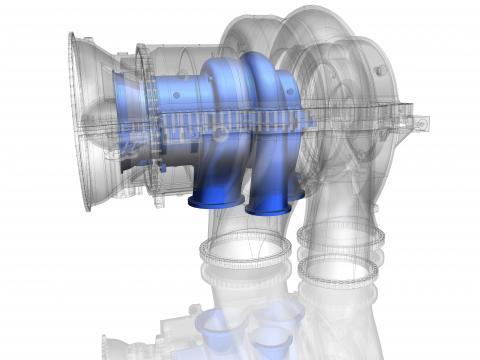 Air Liquide, a leader in gases, technologies and services for Industry and Health, is planning to build an Air Separation Unit (ASU) in Secunda, South Africa, with a production capacity of 5,000 tonnes of oxygen per day. This facility is expected to push the technical boundaries that have existed up to now, with regard to efficiency, reliability and safety.

The Airmax compressor solution from MAN Diesel & Turbo, which is an essential component in the new ASU, is likely to set new records.

The Airmax solution deployed consists of a main air compressor of the AR140 type and a type RG 71-4 booster compressor. Both compressors are driven respectively by an electric motor. The AR140 is the biggest version of the MAX1 generation of axial compressors thus far. With an electric driver rated at 65 MW, the axial/centrifugal compressor attains an effective volume flow rate of over 1 million cubic meters of air per hour (m3/h). With an electric driver rated at 27 MW, the integrally geared centrifugal compressor RG 71-4 further compresses part of the air to over 40 bar abs. The RG 71-4 is designed for a maximum effective flow rate of 65,000 m3/h.

The cost advantage generated by the scale of this compression solution is significant compared with the maximum sizes that are common at present which enable a production capacity of roughly 3,500 tonnes per day of oxygen. Air Liquide requires the compressed air for the ensuing rectification process.

Distillation process is used to separate the air into its main constituents – oxygen, nitrogen and argon. As the builder, owner and operator of the ASU, Air Liquide will supply the oxygen and other gases to Sasol, which produces synthetic fuels and chemicals at its Secunda complex.

MAN Diesel & Turbo is likely to ship the compressor system to South Africa in the second quarter of 2016. Air Liquide plans to commission the Air Separation Unit in December 2017.