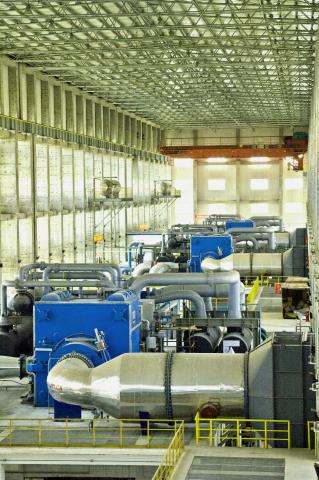 MAN Diesel & Turbo recently received an order to build four turbomachinery trains for an air separation plant in China. It is of particular significance for the company as it received the first order for a compact AIRTRAIN for an air separation plant ten years ago. Today, the combination of three MAN turbomachines has become firmly established in the market, which is further demonstrated by the latest 10th anniversary order from China.

Each of the four AIRTRAIN units to be delivered is made up of the proven combination of perfectly matched turbomachinery, comprising the RIKT 140 centrifugal compressor, a DK080/190 steam turbine manufactured at the Oberhausen site as drive unit and an RG 45 six-stage integrally-geared centrifugal compressor built in Berlin.

The company received its first order to build an AIRTRAIN with the RIKT 140 centrifugal isotherm compressor developed at the Zurich site, and has now been ordered again for the same application. Here, a RIKT unit is used as the main air compressor with an RG-type integrally-geared centrifugal compressor as booster compressor and a steam turbine as drive unit in a common machine train.

The most distinctive features of the RIKT compressor, which is now frequently used in air separation plants, are the coolers integrated in the casing. With this type of compressor, an intercooler is installed downstream of each compressor stage. This not only increases its efficiency, but also results in a particularly compact unit as the RIKT does not require a peripheral cooling system with associated piping.

Air Products, the company’s latest customer, is currently erecting four large air separation units at the Chinese site at Changzhi City in the province of Shanxi with plans to start operation in the middle of 2015. They supply a coal-to-liquid plant owned by the Shanxi Lu’ An Mining Group Co. Ltd. with 10,000 tonnes of oxygen, more than 6,000 tonnes of nitrogen and over 700 tonnes of instrument air.

The production of synthetic fuels and coal-based petrochemical products plays a key role for the fast-growing Chinese economy and its increasing energy needs. Whereas the country has hardly any oilfields, there are plenty of coal reserves. The turbomachinery technology of MAN Diesel & Turbo is helping China make itself less dependent on oil imports.

Markus Keller, Vice President Industrial Gases at MAN Diesel & Turbo SE said, “Looking back on past developments, we are able to state that with the AIRTRAIN we have set a standard for air separation plants. Particularly in the important Chinese market we have succeeded in making a name for ourselves. The first AIRTRAIN machine trains delivered in this configuration have already been operating reliably there for over seven years and are recognized as reference units.”