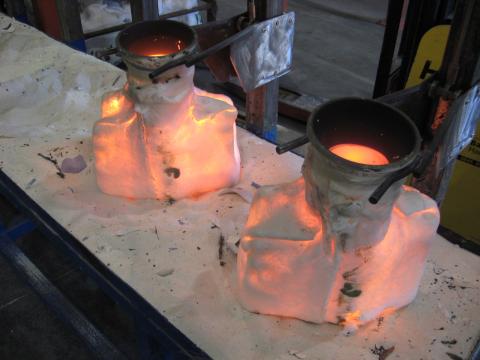 Morgan Advanced Materials carried out a project recently in collaboration with an engine original equipment manufacturer (OEM) and a casting foundry, to develop a next generation low bio-persistent Alkaline Earth Silicate (AES) wool insulation that can replace RCF in the casting of gas turbine blades.

Recent casting trials have confirmed that using AES during product manufacturing results in the same high quality as RCF mold wrap and that there are no other detrimental effects if RCF is substituted with AES. The conversion process is complete, and both companies are now using Morgan’s Superwool HT Blade Wrap in mold wrap applications. Many companies currently use Refractory Ceramic Fiber (RCF) to provide thermal insulation in the investment casting process.

The use of superalloys to manufacture highly critical precision components for the aerospace and IGT industries has increased dramatically in recent decades, because their temperature capabilities allow turbines to run hotter and more efficiently, thereby reducing fuel consumption.

Mold wrap is an essential element in process control for the investment casting process used to manufacture superalloy components. It is used to insulate the pre-heated mold, ensuring efficient mold fill, and to provide controlled cooling during the critical solidification of the metal.

High Temperature Insulating Wool (HTIW) blanket, with carefully controlled specifications, is the normal choice for mold wraps. It is said to have good thermal shock resistance, low thermal mass, and a fibrous structure that makes it highly insulating at high temperature.

Traditionally, the majority of aerospace and IGT casting processes used blown RCF blanket. However, such products have been classified hazardous by the European Union and are strictly regulated. In addition, under the EU REACH (Registration, Evaluation and Authorisation of Chemicals) regulation, RCF has been proposed for inclusion in a list of chemicals that may require an authorization covering the mold wrap application. The changing nature of RCF classification creates uncertainty about future availability and use of these products.

Superwool HT Blade Wrap has been designed to deliver equivalent insulation characteristics to those previously experienced with RCF mold wrap and can thereby be readily used as a substitute.

A major engine OEM and a casting foundry, both suppliers of gas turbines into aerospace, marine and power applications, considered the use of RCF to be a business continuity risk, and decided to investigate.

The two companies began a development project with Morgan as its primary development partner to pursue the use of high temperature AES as the alternative to RCF. The work was largely carried out for the aerospace business they supplied, which requires castings with equi-axed or randomly orientated grain structures using the mold wrap to control the cooling process. The companies required a consistent, thin blanket product with sufficient mechanical strength to be manipulated around complex molds and provide equivalent thermal insulation.

The first phase of casting trialson a broad range of aerospace and IGT products within the engine manufacturer’s foundry confirmed that the castings are manufactured to the same quality and exhibit no detrimental effects compared to castings made using RCF mold wrap. The trials determined that the insulation can accommodate the high temperatures required during the mold pre-heat stage while retaining mechanical integrity. The Superwool HT is also said to offer the advantage of not being on the limit of current pre-heat temperatures, allowing the flexibility to increase the temperature further if required.

Testing measured thermal gradients inside pre-heated molds as they cool to compare the RCF to the Superwool HT wrap materials. Two thermocouples were positioned on the legs of the mold, and then loaded into a furnace held at 1050°C. The temperature was monitored using a data logger, and the mold allowed to soak for five minutes once it reached temperature. The mold was then removed and allowed to cool while the temperature continued to be logged. These experiments allowed the selection of the optimum specification of Superwool HT material.

The team then conducted metal-filled mold trials in the foundries and determined the effects on metallurgy. The results confirmed that the Superwool HT material compared favorably to the existing RCF mold wrap product. Both companies have now fully transitioned to the use of Superwool HT Blade Wrap.

(The author is Research and Development Manager, Morgan Advanced Materials)