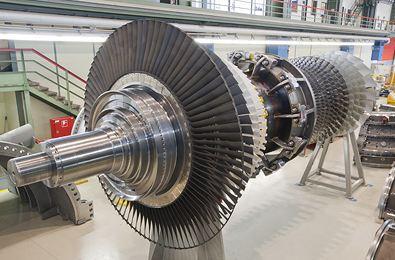 The third of three Siemens H-class gas turbines is en route to FPL’s Port Everglades Next Generation Clean Energy Center in Florida. At the core of the power plant are three Siemens SGT6-8000H gas turbines and one Siemens SST6-5000 steam turbine, all of which were constructed in the Siemens manufacturing center in Charlotte, North Carolina. This turbine is the ninth H-class unit from Siemens that will go into operation in the U.S.A.

Weighing 637,120 pounds and 442 inches long, the turbine is being transported by rail, barge and multi-wheeled vehicle before it arrives at the plant site.

Using the Siemens advanced gas turbine technology, FPL is modernizing its Port Everglades Next Generation Clean Energy Center with the goal of cutting fossil fuel consumption by one-third. FPL estimates this energy center will deliver customer benefits of more than $400 million in fuel savings over the turbines’ entire lifecycle of approximately 30 years.

The fleet of Siemens H-class world-record gas turbines achieved a cumulative 100,000 equivalent operating hours at the end of September 2014. With more than 40 machines sold and 13 already in commercial operation around the world, this gas turbine series is the most successful H-class gas turbine in the global power generation market.

Barry Nicholls, Senior Vice President, Power Systems Sales, Siemens Energy, Inc. said, “Siemens and FPL share a similar vision to pioneer reliable, innovative solutions that benefit customers.” The company is looking forward to partnering with FPL to complete another project that is on time for its scheduled completion in June 2016,” he added.