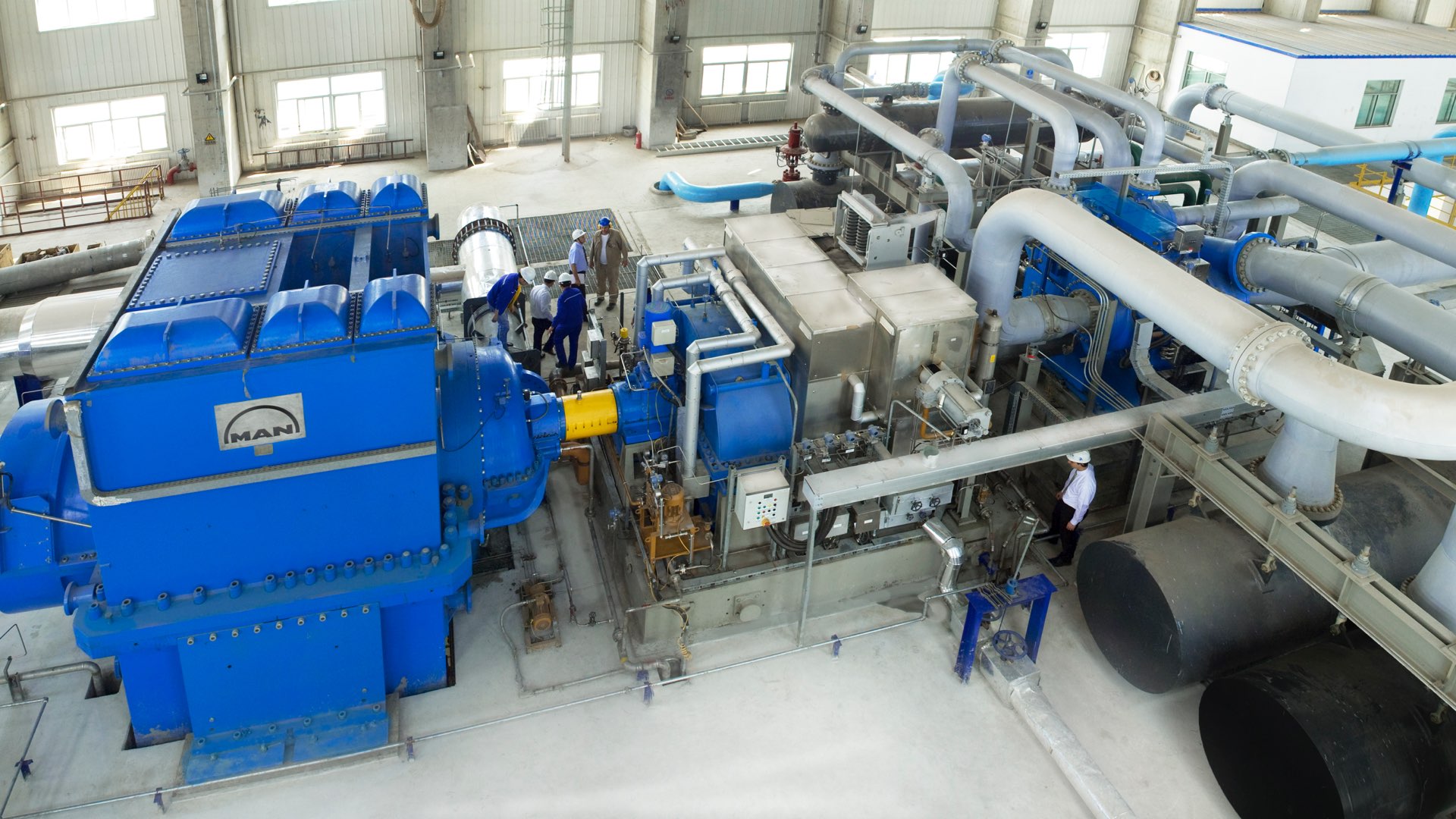 Steam is here to stay. Demand grows for small and medium-sized steam turbines

Wherever heat is available and there is a demand for power, you are likely to find one of turbomachinery’s oldest and world-changing inventions – the industrial steam turbine (ST). The technology has come a long way since its first modern manifestation in 1884, persisting through every market boom and bust.
Until 2016, coal’s fall from grace and the growing share of renewables on the grid had caused the ST market to contract. But growth and stability have returned. Demand is returning for small- and mid-sized combined cycle power plants (CCPP), combined heat and power (CHP), petrochemicals, biomass and concentrated solar power (CSP) solutions. All include an ST element.
With sales recovering, globalization is another trend noted by ST OEMs. Most have established joint ventures with customers and suppliers across the world, which helps turbine companies boost market share, decrease costs, and gain access to new business.
Innovation in STs may not be fast paced when compared to the developmental progress made in the gas turbine field. Nevertheless, OEMs such as Mitsubishi Compressor, Doosan Škoda Power, Siemens Energy, Fincantieri, Triveni Turbine, Baker Hughes, Howden, Ansaldo Energia, Elliott, GE Steam Power and MAN Energy Solutions, among others, have made strides in performance optimization, reduction of carbon emissions, improved efficiency, start-up speed/flexibility and in raising steam parameters.
Turbomachinery International Magazine interviewed several of these OEMs to find out the latest trends dominating the steam turbine sector. They offer a diverse set of market insights.

MCO
Mitsubishi Heavy Industries Compressor (MCO) said its steam turbines are used predominantly in the petrochemical market. Particularly for ethylene plants of 2.0 million tons per annum (MMTPA) and above, the company has developed 20” longer blades to allow a wider variability in operating range. It has also developed STs designed for capacities of 3.0 MMTPA. As a result, its machines can now provide up to 140 MW to drive the cracked gas compressors (CGC) that are central to ethylene plant operations.
Overall, MCO offers API 612-compliant ST packages ranging from 3 MW to 140 MW. In conjunction with other MHI group companies, the company also serves the power generation market.
In recent years, MCO has focused on enhancing the operational efficiencies, reliability and maintainability of its ST packages, according to Tomohiro Mori, Application Engineer, at MCO. They are capable of automatic operation. The sequence from start-up to shut down is controlled by the programmable logic controller (PLC).
One of the company’s most popular models is the 9EH. “9” indicates the frame size (basic diameter of the control stage is approx. 900 mm). “EH” refers to the condensing turbine with an extraction pressure that controls the turbine under high-temperature and high-pressure conditions. It is typically used with a cracked gas compressor in ethylene plants.
In addition, the 9EH model addresses higher plant capacity. It can handle steam at very high temperatures (566°C/1050°F) and pressures (150barg/2133psig). It also provides improvements in energy consumption: the extraction steam from a cracker gas compressor steam turbine is used as the inlet steam for the refrigerant compressor ST.

Doosan Škoda’s medium-sized steam turbines have been its bread and butter.

Doosan Škoda Power
Doosan Škoda Power has been around for more than 100 years. Its STs range from 3 MW to 1,200 MW, and serve gas, solar biomass, and other segments. It is especially competitive in the medium-sized ST market. The company’s turbines are single-casing, high-speed units, either condensing or back-pressure, in a compact configuration.
The DST-V is a variable-speed driven turbine that an output of up to 35 MW. The largest model of that line (up to 80 MW) is the DST-S10, a power generation synchronous ST running at 3,000/3,600 RPM with steam parameters up to 165 bar and 580°C.
The company’s primary market has traditionally been Europe and Latin America, but it is expanding into Southeast Asia and the Middle East.

Siemens Energy
Siemens Energy claims to have the largest share of the steam turbine market. It offers units from 10 kW to 1,900 MW. The company noted an uptick in demand since 2016, with biomass and waste-to-energy applications growing, especially in sectors such as cement, metal and mining, chemical or pulp, and paper. Decentralized power generation and CHP are additional areas of growth.
“Overall, we see a steady and healthy business with industrial steam turbines,” said Tannas Tsakiris, Vice President for Sales Industrial Steam Turbines, Siemens Energy, adding that Siemens has found a stable market in STs ranging from 5 to 250 MW.
Siemens units are typically tailor-made for customer needs using a modularized building block system. The company acts as a consultant to optimize the whole energy system beyond the turbine generator set.
“We analyze boundary conditions, the water steam cycle, space availability, and the necessary extractions for process steam to provide a turbine package/system that fits the required and requested needs,” said Tsakiris.

Fincantieri
Fincantieri, an Italian company known for shipbuilding, develops STs used in oil refineries, paper mills, sugar mills, petrochemicals, waste-treatment, biomass, CHP, food production, cement works and steel plants. Its STs are available with power outputs of up to 50 MW, steam inlet conditions of up to 140 bar/540°C, and rotational speeds of 3,000 to 13,000 rpm. The lineup includes condensing, backpressure, controlled extraction, multi-stage, multi-valve, single-stage, and single-valve turbines.
Fincantieri’s most popular steam turbines are the THR and TVR series, with a maximum capacity of 4.4 MW. They have a simple construction, high reliability and moderate cost. The turbine wheel, with a single stage or a Curtis stage plus a second impulse stage, is assembled overhanging the pinion shaft, creating a compact geared turbine unit. The steam exhaust (directed axially) allows easy positioning on the floor. A modular system breaks its turbines into various subassembly units.

Triveni’s TST2018 is an extraction condensing turbine that offers process steam through extraction as well as power.

Triveni Turbine
Indian steam turbine manufacturer Triveni Turbine has an installed base spanning 70 countries and generating over 13 GW. The company is capitalizing on a growing demand for refurbished turbines and after-market solutions to meet changing conditions, such as growth in size and scale, or aging machinery.
Triveni Refurb, the repair arm of the company, services older generation and third-party turbines. It offers efficiency upgrades to help customers avoid the purchase of a new unit. Its turbines range up to 30 MW. It primarily serves South and Central America, India, Middle East, Africa, Russia, Turkey, Europe and South East Asia.
Triveni’s turbines have a steam inlet temperature of up to 545°C and an inlet pressure of up to 120 bars. The company can provide straight condensing, bleed condensing, extraction condensing, double controlled extraction condensing, injection condensing, axial condensing, reheat condensing, backpressure steam turbines. straight backpressure, extraction backpressure, and bleed backpressure.
The most popular models are the TST2018, TST1150 and TST2150IR. They typically serve process cogeneration, sugar cogeneration and the cement waste heat recovery market segments. The TST2018 is an extraction condensing turbine that gives process steam through extraction and power for captive use, aimed at the CHP market. The TST1150 is a back-pressure model used for process steam and power. TST2015IR is an injection condensing turbine used mainly in cement and waste heat recovery.

Howden
Howden steam turbines range from 100 kW to 15 MW. Some are focused on the mechanical drive market such as its API611 models. Others are more appropriate for power generation applications. They operate at inlet pressures from saturated steam at 10 bar to overheated steam at 131 bar/530°C. Discharge pressures range from 0.06 bar abs up to backpressure applications at 45 bar.
Howden Mono and Twin turbines are available for power generation. They favor an integrally geared overhang design. One benefit is nozzle group valve control that enables higher efficiency at part load operation.
For Twin turbines, Howden configures two overhang turbine casings with one integral gear. This setup allows for higher performance, good part load behavior and precisely controlled extraction pressure. All turbines can be equipped for automated quick start without pre-heating.
Recently, Howden has been working on digitizing its steam turbine operations.
“Digitized operation will facilitate predictive maintenance, optimize steam turbine efficiency and improve operability,” said Dr. Matthias Schleer, R&D director for Steam Turbine Products at Howden.

Ansaldo Energia
Ansaldo Energia offers large ratings for reheat applications suitable for supercritical and ultra-supercritical conditions, as well as compact modules for smaller ratings and single- and two-cylinder model for non-reheat thermal cycles. It also caters to district heating and cogeneration applications. They are available in a back pressure or condensing configuration.
The lineup includes the RT-30, a 150 MW to 1,000 MW steam turbine for reheat. The MT15, MT20, and MT10, all for non-reheat applications, range from 40 MW to 350 MW. The GT is the company’s geothermal model with capacity from 40 MW to 150 MW. Steam turbine retrofits are available.

Baker Hughes’ SC/SAC Series are single-flow turbines that use both impulse and reaction blades.

Elliott
Elliott STs serve industries such as oil and gas, chemical and petrochemical, pulp and paper, power generation and food processing. As power requirements, steam conditions, and speeds continue to rise across the industry, Elliott has developed units to meet changing operating conditions. They are rated for inlet steam conditions up to 2,000 psig/1005°F and speeds up to 20,000 rpm.
Elliott STs range from 20 HP (15 kW) single-stage units to 175,000 HP (130 MW) multi-valve, multi-stage extraction condensing units. They are customizable and can be built to API standards.
Single-stage YR series units are known for operating in harsh conditions. Multi-YR (MYR) turbines combine the reliability and parts interchangeability of the YR turbine with the power and efficiency of multi-stage turbines. MYRs produce more power without additional steam and can be installed in areas where single-stage STs are currently operating.
Multi-stage (or multi-valve) STs are another core component. Designed to API 612 standards, they have a small footprint and offer high efficiency. Under typical operating conditions (600 psig/750°F) they provide more than 80% efficiency. They can also operate under high-pressure/high-temperature conditions (1300 psig/ 905°F).
Elliott also offers ST generators for on-site generation with standby power of up to 50 MW, including renewable energy applications and green energy initiatives.

GE’s STF-D Series is a modular product platform for utility reheat steam turbines in the 100 to 1,200 MW power output range.

MAN
Steam turbines from MAN Energy Solutions can be used for mechanical drive or power generation applications. With a power range between 1 MW and 180 MW, they can be scaled for special process and customer requirements.
These STs are used in waste-to-energy, biomass, geothermal, CSP and industrial power generation applications like waste heat recovery. Moreover, the same technology is applied to new solutions for power generation such as expansion of methane, carbon dioxide or air.
Its small and medium units are among its most popular. The MST040 operates between 3 MW and 15 MW at 140 bar inlet pressure and 540°C. MAN offers five others with the same inlet pressure and temperature, but higher power outputs, maxing out at 180 MW for the MST120 series. ■