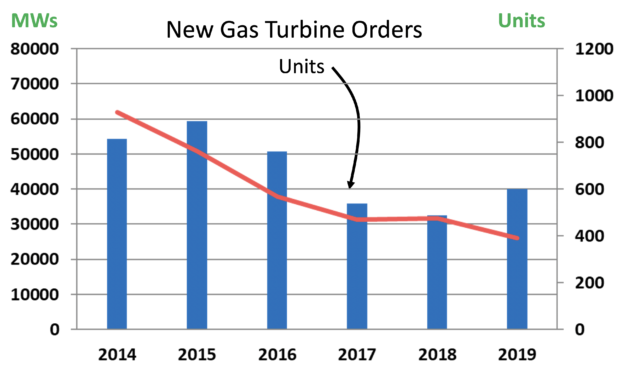 The bad and good news in the gas turbine market

Just as we were about to hear some better news about the gas turbine market at the Western Turbine Users Conference, the world was turned on its head by the Covid-19 inspired shutdown. In parallel, a price war erupted between Organization of Petroleum Exporting Countries (OPEC+) members Saudi Arabia and Russia resulting in a precipitous crash in the price of oil.
No one knows yet the extent that these events will impact orders and revenue. What is becoming clearer, though, is the that various parts of the turbomachinery landscape will probably be affected in different ways. Orders for some small gas turbines are likely to rebound faster, such as the GE LM2500 and its variants, as well as various models within the Solar Turbines portfolio. At the high end of the market, orders for advanced class machines may not languish for too long. GE, Siemens and Mitsubishi will continue to fight for orders in this category. However, many mid-sized machines may struggle unless new markets open up.
The best opportunities for turbomachinery business appear to be in LNG, pipelines, flaring, methane reduction, and especially aftermarket and maintenance.

Recovery
By all indications, it looked like the gas turbine market had finally begun a recovery in 2019. MW orders were up for the first time since 2015. Overall, though, we had seen a 39% drop in MW orders and a 65% slump in unit orders since 2012. Compared to 2018, last year saw a rebound of 23% in MW orders, but a decline of 18% in unit orders. Tony Brough of analyst firm Dora Partners assigns that jump mainly to coal retirements prompting coal-to-gas switching.
“Two disruptive global events will likely result in significant market turbulence to the gas turbine business,” said Tony Brough of analyst firm Dora Partners.
The first of these is friction between Russia and Saudi Arabia concerning a mutual oil production collaboration policy. This caused oversupply at a time of dramatic downturn in demand, driving the price of oil to an 18-year low of close to $20 per barrel.
The global coronavirus pandemic then induced a major reduction in consumer demand, as well as temporary business closures to comply with mandatory social distancing. Both events are exerting an adverse impact on global GDP.
Dora Partners, therefore, predicts that new gas turbine orders will experience a big reduction primarily due to delayed project execution. The amount of the drop remains to be seen. Analysts forecast a downturn in aftermarket products and services, but demand from unplanned maintenance may help.
“Historically, cash conscious business leaders restrict maintenance spending when major market turbulence occurs,” said Brough. “But there will be some spot increases in maintenance activity, primarily due to opportunity taking of underutilized equipment during the current market turbulence.”
Dora Partners estimates a fall in unit orders as high as 70% this year in oil & gas and 50% in the electric power generation sector compared to what was expected. Project delays, deferments and cancellations will add up over the year.
Although it is hard to predict the length of time needed for recovery, Brough guesses the power sector will take two years to rebound and oil & gas will take three years.

Small turbines
For the purposes of this article, we are defining small as being less than 40 MW. It includes a large number of aeroderivative models including the LM2500. This sector has been doing relatively well.
“The small turbine market has remained steady mainly due to orders from the oil & gas segment, not utility power generation,” said Mark Axford, Principal at Axford Turbine Consultants.
The LM2500 and its variants comprise by far the largest aeroderivative fleet in existence. Over the past five years, they account for 38% of all aeroderivative units ordered, according to Dora Partners. This machine is favored for oil and gas mechanical drive applications over other units due to its reliability, and the availability of trained personnel and aftermarket providers servicing these models, added Brough.
“There has been steady and robust demand for the GE LM2500 and LM2500+ primarily for compressor drive and LNG plants,” said Axford.
This is helping to maintain GE’s dominance in the aero market although its share slipped from 66% of all aeroderivative units in 2018 to 47.6% in 2019. Part of the reason for the drop from GE was a hefty order book for Russian firm UEC which has a virtual monopoly on the burgeoning Russian commonwealth pipeline business. UEC captured 40% of aero unit orders in 2019, though Dora Partners does not expect this number to be sustained as the number was inflated by unusually large pipeline orders.
Siemens comes next with an 11.3% share. It offers a wide range of aeroderivatives including the SGT-AO5AE, SGT-A25RB, SGT-A30RB, SGT-A35RB, and the SGT-A45TR. These are primarily destined for oil & gas sites.
Rounding out the aeroderivative market is PWPS with 3.2% share, down from 4.5% in 2018. The FT8 (30 MW) has been the company’s top seller over the past five years, though PWPS have made inroads into the 40 MW to 70 MW segment with the FT4000.
When industrial gas turbines are included, Solar Turbines sells the most small units overall. Axford said the Solar Taurus family in the 5 MW to 7 MW range is doing well. Along with the LM2500 family, they are favored by the oil and gas industry. But the recent crash in oil prices means capital budgets for 2020 are being pared back and new projects delayed. This will reduce GT orders during 2020 in this segment.
Midsized turbines
The 40 MW to 100 MW segment is currently dominated by the Siemens SGT-800, according to Dora Partners.
“The SGT-800 is an efficient (almost aeroderivative-like) unit, with excellent dry low emissions capability on both gas and liquid fuel,” said Brough. “That unit is taking market share from aeroderivatives and is also well accepted for cogeneration use.”
He believes this turbine category is likely to begin to win orders for renewable offset i.e. as the total MW capacity on the grid gains more renewable sources, the variability of available MW-hours rises. Something has to fill the gap when renewables are not producing and power is in demand. Over the last 10 years, that gap filler has mainly been turned-down coal plants and non-baseload large industrial gas turbines (E- and F-class gas turbines). But coal plant retirements are speeding up, large industrial gas turbines are increasingly moving toward baseload, and renewables keep coming online.
“The need for new, more flexible supply is going to increase, and aeroderivatives are an ideal solution,” said Brough. “But now it may be 2021 or 2022 before we see it.”
The LM6000, however, appears to be struggling. It captured only 6.5% of aeroderivative market share over the past five years. While it consists of an impressive fleet of more than 1,100 units, it is no longer gaining many sales. Axford predicts additional pressure on mid-sized gas turbines due to accelerated industry adoption of battery storage during 2019.
“The installed cost per MWH of battery storage continues to fall,” he said. “I am pessimistic about the future of the GT market for simple cycle peaking and balancing power as a greater fraction of this need is likely to be fulfilled by battery storage.”
He conceded, however, that smaller combined cycles will be a better match for the grid in some international markets than the typical 500 MW to 1000 MW combined cycle power plant (CCPP) that accounts for the majority of MW orders these days. Axford believes that smaller CCPPs plants will probably be built using 40 MW to 60 MW gas turbines. But he sees a bleak future for GTs with older technology in the 60 MW to 180 MW range. Most future orders for such machines, therefore, are likely to be for replacement units at existing plants rather than new power plants based on E-class and F-class technology.

Aeroderivative orders in 2019 from outside of North America. Courtesy of Dora Partners & McCoy Power Reports.

Large turbines
2019 appeared to mark a turning a point in terms of increased MW orders after three consecutive down years. But 2020 is now unlikely to continue this trend. The various OEMs have been jockeying for dominance in various parts of the market. GE has historically been number one in MW orders but in 2018, MHPS moved ahead in the large gas turbine space (over 200 MW).
Axford said GE reasserted its top dog status in 2019 due to orders for its HA series GTs. “GE regained a clear position the top gas turbine provider worldwide in 2019,” said Axford. “Market worries about technical problems relating to GE HA class machines seems to have been rectified.”
Axford believes GE, Siemens Gas & Power and Mitsubishi now have comparable advanced GTs in the 250 MW to 400 MW range. Therefore, business will be won by the seller with the best combination of installed cost, guaranteed efficiency and long-term cost of maintenance. Not surprisingly, all three OEMs push hard to bundle long-term maintenance contracts with the initial equipment sale.
Summary of opportunities
There is no escaping the fact new gas turbine orders are going to have a difficult year. The most dramatic reduction is likely to be in unit orders. though MW will take a significant hit, too.
But with every problem comes opportunity. Let’s review some of the opportunities that may be out there.
Maintenance: Large capital expenditures may be put on hold. But maintenance spending is likely to soften the blow. This will manifest in several ways. Actions previously put off due to production necessity are likely to be scheduled now that demand has softened. And with some orders postponed for new turbomachinery, plants will have no choice but to attempt to gain more life out of existing units. That adds up to more focus on maintenance, upgrade requests and component replacements.
“A downturn in aftermarket products and services will be dampened by unplanned/urgent maintenance of equipment,” said Brough. “Historically, cash conscious business leaders restrict maintenance spending when major market turbulence occurs. There will be some ‘spot’ increases in maintenance activity, primarily due to ‘opportunity taking’ of underutilized equipment during the current market turbulence.”
LNG: As covered in our March/April cover story, LNG has been a primary source of good news of late. This market may take a hit, but the difficult part has largely been accomplished – the establishment of the necessary infrastructure in terms of liquefaction trains, terminals and transportation. LNG may struggle somewhat but its rebound is likely to be rapid. There will likely still be plenty of business for anyone building, supplying, maintaining or servicing LNG facilities.
“The delivered price of LNG has fallen substantially as numerous LNG export terminals have come online,” said Axford. “This means LNG will be a more affordable fuel both near term and long term. This will be especially important in countries that do not have an indigenous supply of natural gas or pipeline infrastructure. The growing supply of affordable LNG is good news for all sizes of gas turbines.”
Pipelines: Axford and Brough noted that one of the strong areas for gas turbine sales is pipeline compression. This trend is expected to continue. Pipeline construction may slow, but will ultimately continue.
Flaring: Environmental groups are hounding oil & gas drillers to eliminate flaring of excess gas. Anyone coming up with an easy way to transform flaring into on-site power generation has a large potential market. The sizing and pricing have to be right, and units probably need to be easily transportable. But there is a worldwide need to curtail the practice of flaring.
Methane reduction: Flaring and venting of natural gas are just one facet of the methane emission challenge. Pipelines, valves and other components suffer from methane leakage. Solutions that address these problems will find demand as oil & gas companies are under pressure to greatly reduce methane emissions. ■