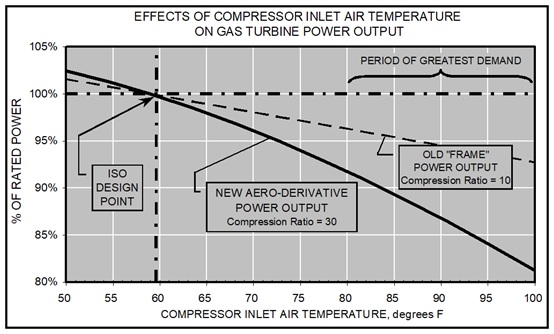 While some of the GT systems support the base load demand,  other GTs are brought online as requested by the regional transmission organization (RTO) in the U.S. to meet short term peak demands. Capacity payments to a power producer are based on the plant’s MW capacity and the energy payments are based on the electric energy it produces. A power producer is paid regularly for its capacity to commitment even if it is not called upon by the RTO for supplying electric energy. Since the installed capacity of renewable sources of electric power, such as solar and wind, has significantly increased, it has reduced the run hours of many GT systems. In addition,  the intermittent nature of those renewable resources has created a need for a rapid response by GTs or other power systems, and has also increased the annual number of times a GT unit as to be started and shutdown.

This article discusses turbine inlet cooling (TIC) technologies and their importance for improving the performance and economics of GT-based electric power plants, as well as their relevance to the need for fast response time.

Air density impacts the performance of all gas turbines. Air density changes with changes in air temperature, humidity, and atmospheric pressure. Therefore, all GTs are rated at a standard set of ambient conditions. International Standards Organization (ISO)’s standard 3977-2 is used for rating GTs. It defines standard ambient conditions as 59oF, 60% relative humidity, and atmospheric pressure at sea level.An increase in ambient temperature has the most impact on decreasing the air density and performance of GTs. Increase in ambient temperature also increases demand for electric power due to increased use of air conditioning equipment in buildings. Increased demand for electric power results in increased market price of electric energy.

turbine. Similarly, an increase in ambient temperature also reduces the capacity of heating and cooling equipment in other modes of GT operation, such as cogeneration or combined heat and power (CHP).

Since the increase in ambient temperature reduces the performance of GTs, it follows that cooling the inlet combustion air prevents the detrimental impact by increasing their capacity and efficiency. Fortunately, a number of commercially-proven turbine inlet cooling (TIC) technologies have been successfully implemented. The time to reach steady state from cold start for five of these technologies, shown in Table 1, ranges from 2 to 15 minutes, depending on the total system capacity, ambient temperature and the desired cooled air temperature.

No one TIC technology is best for all applications. Each technology has its pros and cons. Selection of the most economically-attractive TIC technology depends on many factors including, value of the additional electric energy produced, weather data for the plant location, number of hours TIC will be operated per year, GT design, and fuel cost. A good resource for information on all TIC technologies is the website (www.turbineinletcooling.org) of the Turbine Inlet Cooling Association (TICA), which is a non-profit trade association that promotes the development and exchange of knowledge related to TIC.  The TICA website is the one-stop source of information about all TIC technologies, including a database over 400 installations.

Market price of electricity is high when the demand for power is high. Power demand is high when ambient temperature is high because of increased air conditioning load. Since TIC cooling mitigates the loss of GT output capacity when the ambient temperature is high, it allows power producers to bid for higher capacity than would be possible without TIC. Since TIC also increases electric generation efficiency, it allows power producers to produce electricity at lower fuel cost than that possible without TIC.