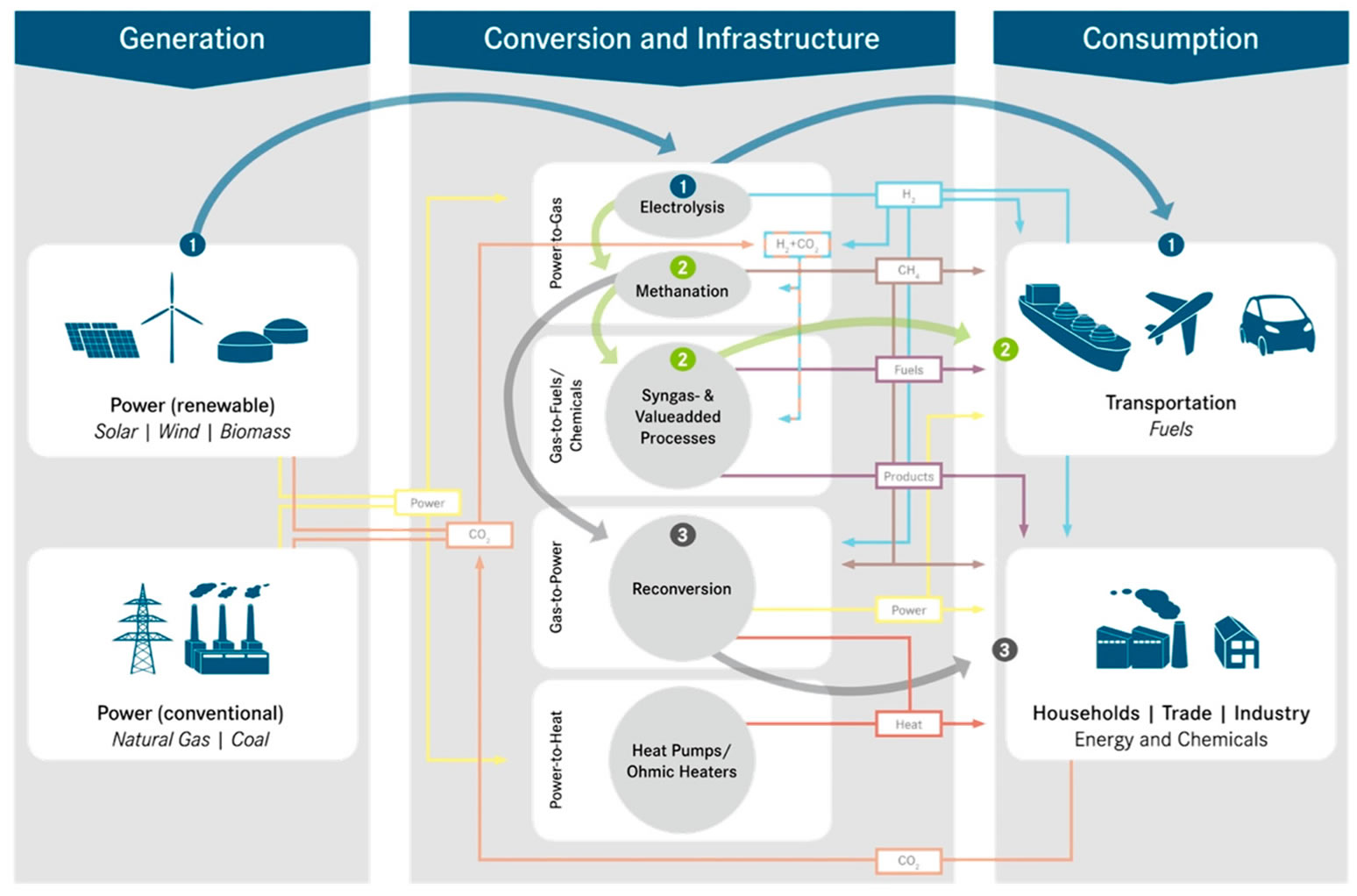 There are a variety of different applications for Power-to-X, some of which are included above.

Power-to-X is an umbrella term for a number of conversion, storage and reconversion pathways that use surplus electric power from renewable energy, typically solar and wind. “X” stands for the type of energy into which the electricity surplus is being converted. These are generally gases, liquids or heat.
Efforts to cut carbon emissions and improve local air pollution require changes to how energy is produced and consumed. The European “Green Deal,” for example, is a set of policy initiatives from the European Commission with the aim of making Europe climate neutral by 2050. It includes the phase out of coal, a substantial increase in renewable generation and ambitious targets to cut greenhouse gas (GHG) emissions by 2030.
Wind and solar energy represent the main pillars of these plans, but hydrogen has a complementary role. It is seen as a way to enable large-scale integration of renewables into the power generation network; as a means of distributing energy across sectors and regions, and as a storage buffer to increase system resilience. Wind and solar require large-scale energy storage to compensate for short-term and seasonal imbalances. Due to the orders of magnitude involved, this can best be achieved by converting excess electricity using various Power-to-X concepts.
Hydrogen can be produced in numerous ways including fossil fuels, biomass, crops, nuclear energy and from renewable energy sources, such as wind, solar, geothermal and hydroelectric power. This diversity of potential supply sources is why hydrogen is seen as the ideal energy carrier. The main Power-to-X concept being targeted uses excess renewable electricity production from wind and sun to split water into hydrogen and oxygen in an electrolyser. As the hydrogen is produced from purely renewable sources, this is known as green hydrogen.
In the transition phase, natural gas reforming would be required. This is a carbon-neutral resource if carbon capture technology is utilized. The reforming of hydrocarbons is seen as a kick-starter to the provision of sufficient hydrogen supply at short notice, enabling the creation of the necessary hydrogen infrastructure. This includes investment into gas grids. Meanwhile, existing assets and infrastructure can be used with adapted gas turbine technology to reduce the carbon footprint of power generation and oil & gas. The scalability of gas turbines from small decentralized to large centralized systems offers enough flexibility in terms of production capability and local storage requirements.
Power-to-X concepts also offer an opportunity to reduce GHG emissions in heavy transportation vehicles, ships and air traffic. For instance, synthetic kerosene obtained using electricity from renewables is currently the only fuel enabling climate-neutral flight. Linking traditionally separated sectors of the energy system like electricity, gas, heat and transport, can raise energy efficiency and lower network investment costs. This is known as sector coupling. For example, coupling hydrogen gas turbines with other industries (e.g. chemicals and refineries) enables waste heat to be used.

Power-to-Gas is the most promising concept as it can provide significant amounts of hydrogen or synthetic methane utilizing excess electrical power from renewables to produce a gas fuel. Electrolysis is used to produce hydrogen, which can be used directly or converted to syngas, methane or liquefied petroleum gas (LPG). The resulting gases can either be used as chemical feedstocks, burned to produce heat or converted back into electricity using gas turbines and gas engines. In addition, power-to-gas opens the door to long-term energy storage of clean electricity for use in all other energy consumption sectors.
Power-to-Liquids is a process that adds carbon dioxide to hydrogen to produce ammonia, methanol or kerosene. If the added carbon comes from biomass, sewage sludge or is extracted directly from the air, it is CO2-neutral. These fuels are easier to store and transport than pure hydrogen and can be used as feedstock in industry. For example, 150 GWh could be stored in one 50m x 30m liquid ammonia tank. Underground storage could also be used, especially salt caverns as a space-efficient long-term storage option.
Power-to-heat works either by resistance heating or via a heat pump. Large heat pumps in district heating systems with thermal energy storage are an especially attractive option for power-to-heat or cold as they offer an efficient way to make use of excess wind and solar power.
A hybridization layout is being developed and demonstrated as part of a European Commission-funded PUMP-HEAT project. It is based on the coupling of a fast-cycling heat pump (HP) with a combined cycle (CC) power plant. The project aims to enhance performance under any climatic conditions. This approach can be applied to new or existing plants and to an entire fleet to improve power flexibility and efficiency. Integration of a CC, HP and cold/hot thermal storage can reduce the minimum environmental load (about 50% of full output, operating at lower loads, can reduce combustion temperature, reduce the conversion of CO to CO2 and potentially exceed permitted emissions.). It can also raise power ramp rates, increase electrical grid resilience and improve gas turbine flexibility. Further, it demonstrates that Thermal Energy Storage (TES) combined with a heat pump can be integrated into CCs as an equivalent to conventional electrical storage at lower cost.

Turbine innovation
The current turbine fleet is optimized for natural gas but can probably handle up to 5% hydrogen without modification. Fuels with higher hydrogen content or pure hydrogen demand modifications to the combustion system, greater fuel flexibility and improved safety measures.
Technologies were developed for Integrated Gasification Combined Cycle (IGCC) plants that can burn gas mixtures with high amounts of hydrogen. However, they typically use dilution agents such as water or nitrogen that reduce efficiency, increase complexity and add costs. Some industrial scale gas turbines are under development that can burn gas mixtures with high hydrogen content (up to 100%) without dilution. However, they may not offer sufficient fuel flexibility. This is an area ripe for turbomachinery innovation.
With little to no modification, a blend of hydrogen and natural gas can be transported within the existing gas infrastructure. A new or retrofitted piping infrastructure, though, would be necessary for 100% hydrogen transport. Combusting hydrogen at the point of production could solve this problem during the initial phase of the transition.

Options for storage and transport of hydrogen, depending on its state.

Another vital area of research concerns system dynamics and how best to integrate fluctuating renewables. Cooperation is needed between hydrogen producers, end-users, gas turbine manufacturers and academia to demonstrate technology effectiveness in a timely and cost-efficient way. Key areas include combustion instability, how to maintain low NOx emissions for up to 100% hydrogen, coping with a range of natural gas and hydrogen mixtures, and addressing rapid changes in fuel composition. New materials and cooling technologies are also needed for hot gas path components.
Work is ongoing with the FLEXnCONFU project to increase the flexibility of combined cycle power units by running them partially on hydrogen or ammonia. The goal of the EU-funded project is to develop and demonstrate economically viable and replicable Power-to-X-to-Power solutions.
All available options for the effective and flexible use of surplus power from renewable energy will be combined to level the power plant load by converting electricity into hydrogen or ammonia prior to converting it back to power. The hydrogen co-firing concept will be demonstrated at EDP’s 1.2 GW Gestão da Produção de Energia Ribatjo power plant in Portugal. ■

Christer Björkqvist is Managing Director of ETN Global. The mission of the turbine network is to bring together the turbomachinery value chain to accelerate research development and demonstration of safe, secure and affordable carbon-neutral turbomachinery-based energy solutions by 2030.