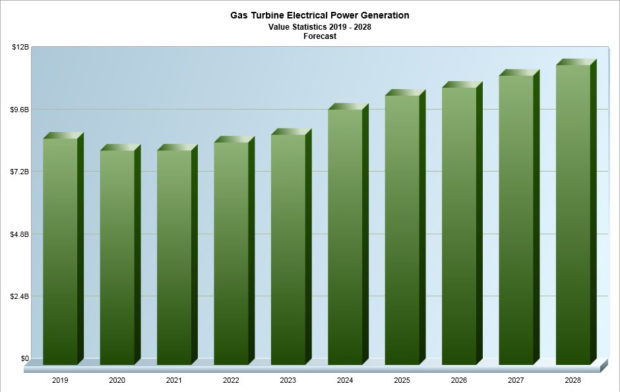 Forecast International predicts that the power generation market for gas turbines will continue to contract as it has done for the past five years. Sales in the ten-year period 2019 to 2028 will total $96.045 billion, 10.6% less than last year’s sales projection for the 2018-to-2027 period.

The market decline is likely to continue through 2021. However, an upturn should then take place and continue each year until the end of the projection period in 2028. This contraction is a direct result of the spreading crisis caused by overcapacity in the power generation equipment sector and the resulting softness of prices. Companies are selling fewer power generation gas turbines than they had predicted and are receiving a lower unit price for each sale. As a direct outcome, GE, Siemens and Mitsubishi Hitachi Power Systems (MHPS) have undertaken major restructuring to reduce costs and rationalize production. These measures, though, are proving of only limited effect and a more fundamental reorganization appears necessary.

At present, GE controls 47.4% of the projected market by value, Siemens 21.9% and MHPS 19.3%.* These three OEMs control 88.6% of the total market. The remaining 11.4% is comprised of a dozen or more companies led by Ansaldo Energia at 6.3%, followed by Mitsubishi Heavy Industries (MHI) at 3.3% and Solar Turbines at 3.3%. The remaining group of manufacturers collectively accounts for less than 1%.

For the near term, there appears to be little relief from the current market depression. The situation of reduced demand, manufacturing overcapacity, and soft prices will continue until at least the early 2020s. Only after these factors have worked themselves out is recovery expected to take place. Once the middle and far-term periods are reached, it is predicted that the industry will be dominated by large combined-cycle facilities in the industrialized nations.

General Electric and Siemens both produce turbines in this output range, but others exclusively make small machines. With turbines of this size, Solar remains the market leader with about 2.9% of the value of the gas turbine market. Solar’s Mercury model is particularly popular with customers. MAN and Kawasaki occupy a smaller portion with a combined 0.5% in terms of value.

In terms of unit production, Solar occupies roughly 20.5% of the total market. Slightly less publicized are the Ukrainian and Russian turbines. The Ukrainian company, Zorya-Mashproekt, once provided a large portion of the industrial and marine gas turbines destined for Russia.

Russia is now producing turbines through United Engine Corporation (UEC) comprised of NPO-Saturn and Aviadvigatel, which both produce turbines with the latter producing mainly aviation engines. Although technical details about these machines are difficult to ascertain, installations are generally available. For 2018, UEC Saturn installed 194 units with 1,535.7 MW of output. UEC Saturn has less than 1% of the market in terms of value and holds nearly 3% of total unit production.

Capstone remains the market leader in microturbines. FlexEnergy is next, occupying about half of Capstone’s footprint. Both companies combine to account for nearly 95% of the market in terms of value as it currently stands. Ansaldo Energia offers a 100 kW machine, but little is known about sales performance.

New European microturbines are also coming to market. MTT’s EnerTwin, Bladon’s 12 kW machine and Aurelia’s 400 kW turbine have yet to sell in significant numbers so forecasting is speculative. The 2019–2028 timeframe should see a doubling of these new machines’ market share in terms of value.

At the other end of the scale, power output of large gas turbines continues to increase. While 200 MW was considered large a few years ago, outputs at five times that figure are not uncommon. Gas turbines an order of magnitude more powerful are entering the market. A growing number of these large turbines are deployed with heat recovery units in combined cycle power plants claiming efficiencies of more than 60%.

It should also be noted that a 400 MW gas turbine costs significantly less than two 200 MW turbines. The difference increases steadily as the output of the larger turbines goes up. When building big, centralized power generation facilities, it is more economical to use the largest models. This makes the market situation more complex. A major power station requires a state-of-the-art electrical grid to distribute the generated power. This is not available in some parts of the world. In such cases, the cost of establishing such a grid must be included within the economic analysis of the project. The added capital cost of establishing distributed generating capacity using numerous smaller turbines may be less burdensome than the costs of providing a distribution network.

The same may apply to fuel sourcing. If coal is abundant and the infrastructure to transport it to the point of use already exists, these factors may override the advantages of gas. This may be a factor in the continued procurement of coal-powered steam turbines in some regions.

In the long term, escalating demand for electric power will continue to increase the worldwide demand for gas turbine-based power plants that use the latest technology. Thus, it is likely that the market will recover, and investment is likely to focus on industrial gas turbines with the highest outputs. This can be expected in areas, such as China, North Korea, Vietnam, Indonesia, Thailand, Brazil, and the Middle East.

Analysis of the sector has become more complicated as the primary drivers have shifted from technical and economic to political and environmental. Stated goals include reduction of emissions and cutting down on the use of fossil-fuel resources. Subsidies promoting the use of renew-able resources and low-emissions fuels distort the market, complicating the relationship between energy demand and generation capacity. In recent years, too, a significant proportion of increased electricity demand has been met not by adding generating capacity, but by improving grid efficiency.

The development of modern control systems also has reduced the amount of spinning reserve as a proportion of baseload capacity. A case could be made that the shift from a simple bilateral relationship between supply and demand to the current, highly complex multilateral relation-ship is at the root of today’s problems.With so many factors influencing the marketplace, it is important to recognize that gas turbine procurement is no longer directly related to increasing power demands.

The option of obtaining additional gas turbines is one of many that exist. The same effect may be obtained by converting an existing simple-cycle plant to combined cycle through the installation of a heat recovery steam generator (HRSG) and a steam turbine. An indirect approach may be to invest in grants to improve energy efficiency rather than in new power generation facilities.

*Figures include subsidiaries and licensees.

Carter Palmer is an Industrial & Marine Gas Turbine Analyst at Fore-cast International with a focus on smaller gas turbines and microturbines.