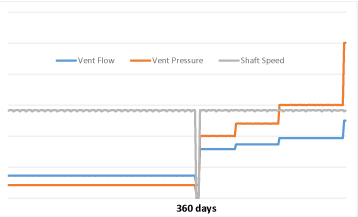 It is important to distinguish the difference between alarms and trips in the dry gas seal monitoring and control system. Alarms trigger an alert that a condition outside the normal range of operation has been reached. Trips initiate an automatic shutdown of the compressor. Alarms should be actionable and allow operations to respond and correct the condition preceding any trips.

Trend alarms, alarms based on change in measurement value over a set time period, can be applied within site condition monitoring systems to alert the technical team prior to a traditional alarm triggering. When troubleshooting, absolute values are not necessarily the main concern. As with most parameters in equipment monitoring values from seal gas system instruments are never steady or constant. Values will vary or drift over short periods of time and can cause some concern to unexperienced personnel. This is particularly true of flow instruments for the reasons discussed in the instrumentation section. While large step changes are significant and need to be addressed, small variations are normal. In order to accurately diagnose problems, data needs to be trended over time to show minimum, maximum and average values.

A case study highlighting the above was featured in the paper, “Examination of Methods of Dry Gas Seal Supply, Regulation, and Monitoring” presented at the 2018 Asia Turbomachinery Pump Symposium by Vladimir Bakalchuk and Sreenivasulu Chinnaswamy of Flowserve, Kevin Dwyer and Rich Hosanna of John Crane, Robert C. Eisenmann Jr. of BP and Jim MGraw of VAM Consulting.

A set of dry gas seals was installed and commissioned in a new application which continued to operate for over a year without incident. The compressor was then shutdown for an issue unrelated to the dry gas seal. However, shortly after the restart, the drive end primary vent transmitter recorded a step change in leakage. Although the leakage was high, it remained below the trip value and the compressor continued to operate. Approximately 40 days later the leakage value spiked again this time initiating a shutdown. The dry gas seals were subsequently removed and sent to the factory for examination.

Conducting a review of the P&ID indicated that the gas velocity across the process labyrinth was inadequate to prevent reverse flow into the seal cavity during normal operation. Additionally as part of the RCFA, the start-up procedure was reviewed. The control system was properly equipped with a booster to supply clean gas during the startup and standstill, but the booster was inoperative due to water accumulating in the air driven portion of the booster.

The RCFA concluded that cause for the high primary seal leakage was insufficient velocity across the process labyrinth to prevent reverse flow of unfiltered process gas into the seal cavity hindering the tracking ability of the stationary seal face.