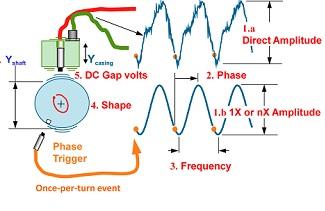 Back to Basics – Rubs I

The following is a continuation of our previous discussion on rubs. We will begin with a brief review of some basic concepts and then give an example of a rub with supporting data plots. In upcoming blog articles which will continue this discussion, additional rub examples will be depicted.

To begin, let us remind ourselves that it is not sufficient to only evaluate whether or not a rub is present. One must also make every effort to try and gain insight as to the initiating mechanism that has caused the rub to occur in the first place. A rub is not a machinery malfunction in and of itself. A rub always results from some other primary malfunction source such as:

There are several symptoms that may be indicators that a rub is present:

The presentation will discuss the analysis of the necessary vibration data plots in order to properly evaluate and determine whether or not a rub mechanism is present within the critical1 rotating machinery asset. Vibration data plots from multiple field projects will be used to help illustrate the diagnostic concepts.

Before proceeding, let’s review a few definitions and concepts.

Single plane transducers only display motion along the longitudinal axis of the transducer.

Orthogonal transducers not only display motion along the longitudinal axis of each transducer, but when combined as a pair or XY coordinates in a Cartesian coordinate system form the shaft orbit, displaying the full dynamic motion in the XY radial plane. Refer to Figure 1.

The 1st Law of Machinery Diagnostics reminds us that much about the nature of machinery behavior can be determined via transient data analysis as rotative speed changes and the speed dependent terms in Equation 1 vary accordingly.

Orbit / Time Base Data Plots are used to primarily examine the shape or form of the vibration; i.e. the two dimensional centerline motion of the shaft as it vibrates in the xy plane perpendicular to the axis of rotation. The Orbit / Time Base Data plot is often used to analyze constant speed vibration response data as a function of time, load, thermal changes, or any other relevant process variable. Amplitude information is simultaneously plotted from a pair of orthogonal (90°) transducers. The amplitude information, coupled with a phase angle reference, is essential for analyzing the dynamic motion of the rotor. Interpretation of Orbit / Time Base Data plots provides insight into the nature (shape and form) of the vibration which changes as the forces which act on the rotor system change; i.e. changes in steady state preloads and support stiffness asymmetry.

Starting at the phase trigger marker and moving around the orbit in the “blank to dot” direction (CCW in this example), count the number of positive peaks that occur in the X direction and in the Y direction. In this example, the X transducer sees two positive peaks in (one is smaller than the other), and the Y transducer sees only one positive peak. The X:Y frequency ratio is 2:1, with vibration components of 2X and 1X respectively. As seen in this example, the shape of an unfiltered orbit can provide important information about the frequency content of machinery vibration.

Shape can also provide clues to the presence of excessive radial loads that may exist. High radial loads tend to push the rotor to high eccentricity ratios in a fluid-film hydrodynamic bearing. The oil film that supports the rotor produces very high spring stiffness at high eccentricity ratios. This stiffness is highest in the radial direction and lowest in the tangential direction.

Figure 3 shows two unfiltered orbits with high radial loads. Note that the two machines turn in opposite directions (black arrows). Both orbits display remarkably similar shapes; in fact they are nearly identical when corrected for rotation direction. The arcs indicate the location of the bearing wall, and the red arrows indicate the likely direction of the applied radial load.

The first item to be realized is that radial or axial rubbing is not a machinery malfunction. A rub is secondary indicator that occurs when there is contact between rotating and non-rotating components. Some of the primary causes that can lead to a rub are:

Axial rubs can result from a mismatch in the thermal growth rates between the rotor and casing. During a cold startup, the turbine rotor expands faster than the more massive casing. A related problem can occur when a slide key or trunion on the machine casing hangs up and prevents free movement of the casing during startup or shutdown. The constrained machine casing can deform, displacing internal parts, resulting in an internal rub.

(In the next article, the author discusses the mechanism of a partial rub, and dynamic stiffness.)

Richard Thomas has over 38 years of rotating equipment experience in industry and currently holds the position of Prinipal Engineer for Metrix Instrument Company. Prior to his current position, his work experience included 11 years as a rotating equipment engineer in the petrochemical industry; 17 years in the Engineering Services Department of Bently Nevada Corporation; and 6 years as the Global Services Manager for RoMaDyn Corporation.