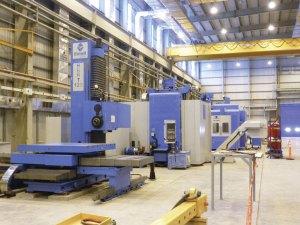 To establish its permanent presence in the Middle East, Dresser-Rand has set up a new service center in Abu Dhabi, United Arab Emirates. The company also formally committed to a new multi-purpose facility in the Kingdom of Saudi Arabia. Its investment in Dammam has created a multi-purpose / multi-product facility combining packaging for the Middle East with a service base in Saudi Arabia.

Dresser-Rand has built its permanent facility in Dammam Second Industrial City. Representing a $53 million combined investment for engineering, construction, machine tools and other equipment, the new facility has repair capabilities for all types of rotating equipment. It also includes offices, a training center, cafeteria and a mosque.

According to Doug Craig, Dresser-Rand’s regional business leader for Saudi Arabia, in Dammam the company has a comprehensive and multi-purpose center with a wide range of technical capabilities. “Plans are underway to include steam turbine blade peening, hot and cold coatings, weld repair and heat treating, hydro-testing, and helium leak testing. In addition to these services, Gimpel valve repair and testing will be available.”

While building the facility, Dresser-Rand management is said to have addressed elements of Leadership in Energy and Environmental Design (LEED) aligning with company policy and standards. A “green” capacity that uses water from the wastewater treatment plant is in place, saving community resources.

Efforts to establish a permanent presence in Saudi Arabia led to the signing of a long-term Corporate Procurement Agreement (CPA) with Saudi Aramco in March 2009. Under the CPA, Dresser-Rand was selected as the first manufacturer to supply a full range of compressor and steam turbine products. The initial “big win” was a contract for 19 compressor systems destined for the Yanbu Aramco Sinopec Refining Company refinery project (YASREF). The project involved the construction and operation of a 400,000 barrel per day integrated petroleum refinery in the Yanbu Industrial City located on the west coast of Saudi Arabia along the Red Sea.

As part of this project, Dresser-Rand Arabia was responsible for packaging eight centrifugal compressors and all of the auxiliary systems, oil consoles, water consoles, and gas seal panels at a temporary facility in Jubail, Saudi Arabia.