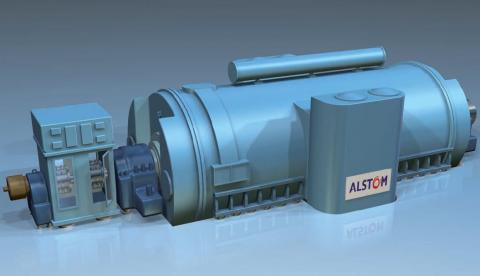 Spiral vibration, also known as the Newkirk effect, can be observed on various types of turbomachinery and is caused by a vibration-induced hot spot on the shaft surface generated by friction.

During performance validation, the relative shaft vibration at the generator, non-driven end bearing was measured to be close to trip level and therefore a root cause analysis was initiated by Alstom to understand and solve the problem. Subsequent running tests on the generator test stand at Alstom’s factory confirmed that the carbon brushes sliding on the slip rings were the cause of the hot spot.

Potential modifications were studied by Alstom using hot spot stability analysis with a rotor dynamic model of the generator rotor, and bearing supports. Based on the calculated results, a modification of the generator shaft line was implemented using tilting pad radial bearings at the generator non-drive end and exciter end locations to shift the slip ring shaft critical speeds well above the rated speed.

The first set of these bearings was ordered in January 2003. The general requirement was for a drop in replacement retrofit with no modifications to the existing bearing pedestals or changes in the boundary conditions permitted. Shaft diameters at the generator non-drive end and exciter end bearings were 400mm and 250mm respectively.

In terms of performance, the new bearings were required to have maximized stiffness coefficients, in the direct coupled horizontal plane. Design shaft speed was 3,600 rev/min, with radial bearing loads of 22 m.t. and 3 m.t. for the generator non-drive end and exciter end bearings, respectively.

Lubricant was ISO VG 46 at a design inlet temperature of 45°C. To maximize the oil film stiffness coefficients, both designs used an offset pivot and the assembled bearing clearance was also reduced below the normal range. The 400mm bearing was manufactured using a ball-and-socket pivot to maximize pivot stiffness and accommodate potential misalignment at the generator non-drive end.

You can read the remainder of this article in the July/August issue of Turbomachinery International.