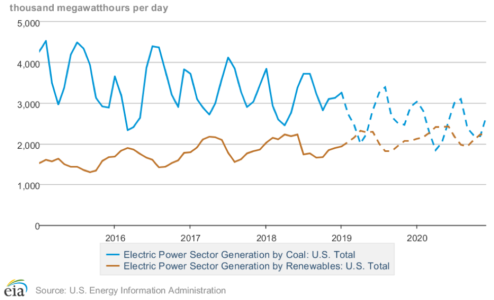 In April, renewables projected to beat coal in US power generation

This month, for the first time ever, the renewable energy sector (hydro, biomass, wind, solar and geothermal) is projected to generate more electricity than coal-fired plants, which totals about 240 gigawatts (GW) of still-operating capacity, according to a report by the Institute for Energy Economics and Financial Analysis.

Below are excerpts from the report.

According to data published this month in the Energy Information Administration (EIA) Short-Term Energy Outlook, renewables may even trump coal through the month of May as well.

As the chart below indicates, the EIA sees renewable generation topping coal-fired output sporadically this year, and again in 2020. The estimates in the EIA outlook show renewable energy generating 2,322 and 2,271 thousand megawatt-hours (MWh/day) per day in April and May, respectively. This would top coal’s expected output of 1,997 and 2,239 thousand MWh/day during the same two months.

To be fair, there are seasonal considerations. Of particular note, is the long-held practice of taking coal plants offline during the lower demand periods of the spring (and fall) to perform maintenance and upgrades to ensure that they are ready for the higher demand of the summer and winter seasons. In addition, spring tends to be peak time for hydro generation.

That said, this represents a momentous development driven by the deep transition under way in the electric generation arena. It is also likely, particularly given IEEFA’s forecasts for continued declines in the amount of installed coal-fired capacity, and steady increases in the amount of installed solar and wind generation, that renewable output will begin outpacing coal more and more frequently—just as occurred with natural gas (see IEEFA’s recent research, Record Drop in U.S. Coal-Fired Capacity Likely in 2018, and, for a broader overview, Coal Outlook 2019: Domestic Market Decline Continues).

It is worth noting that the first instance of natural gas-fired generation exceeding coal’s output happened not so long ago—April 2015 (also likely to do with seasonal variations in demand). Subsequently, the two major fossil fuels—coal and gas—went back and forth on market share through early 2018, with coal generating more in the winters and natural gas winning the summer generation battle (see chart below). The final monthly crossover point occurred in January 2018, and natural gas has held the uncontested top spot in electricity generation ever since. On an annual basis, the two fuels each accounted for about 33% of the electricity market in 2015; since then, their trajectories have taken different paths. By 2018, natural gas’s share had climbed to 35% while coal’s had dropped to 27%. The trends for both are expected to continue.

The tipping point for renewable energy actually may already have been reached in Texas, where natural gas, wind and, increasingly, solar, are steadily pushing coal out of the system. According to data from the Electric Reliability Council of Texas (ERCOT) – the transmission operator running the system that supplies 90% of the state’s electric load – wind and solar generation topped coal’s output in the first quarter of 2019, the first time that this has happened on a quarterly basis. Overall, wind and solar capacity generated 19.41 million MWh during the first quarter, beating the 18.97 million MWh pumped out by the state’s coal-fired plants. Wind and solar output topped coal in March and April 2018, but had never done so before for a full quarter.

It is also worth noting, that ERCOT coal-fired generators produced less electricity during the first quarter of 2019 than they did in the comparable 2018 period, in spite of stronger total demand compared to a year ago. In other words, in the highly competitive Texas power generation sector, coal is winning a smaller chunk of a bigger market.

The shift in Texas will not end overnight, as the state’s coal plants are used heavily during the hot summer months, but the gap is closing. In 2018, solar and wind output totaled 78% of coal’s generation and, as the first-quarter data indicate, the race is narrowing.

The gap will probably close even further over the next few years as wind and solar projects in the state’s development queue are built and brought online. According to the latest ERCOT data, 283 wind and solar projects totaling more than 12 GW of generating capacity have signed interconnection agreements and arranged financing. It is impossible to determine if all those projects will be built, but it is reasonable to expect that a significant percentage will indeed enter commercial service in the near term, a development that will further speed the energy transition in oil-rich Texas.