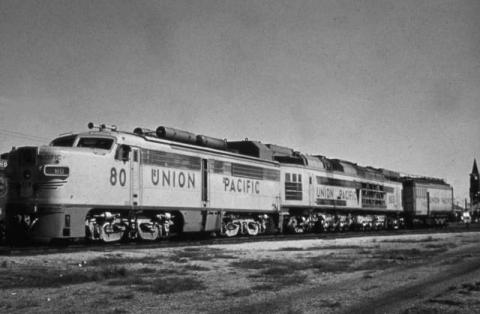 In his previous article, the author discussed how rising fuel costs forced the retirement of Frame 3 and 5 gas turbine units. Here, he talks about the units designed for pipeline service and other applications. Progress was also being made in supercharging the diesel engines to obtain more power.

The diesel was still the king with the railroads. Studies and experimental units were made by other companies in smaller sizes but nothing came of them over the years. However, the GE 3s and 5s were very powerful pullers and were capable of pulling long and heavily loaded freight trains over the UPRR hilly runs. They could out pull any other diesel locomotive UPRR had.

One of the 4500 HP units, number 57, was converted to burn liquefied propane gas (LPG). The test unit was run several months out of Los Angeles. It did very well and the corrosion of the hot gas parts stopped. Maintenance costs were projected to be lowered considerably. Handling the LPG was a problem and the tender also presented safety concerns but today there would not be these concerns because much progress has been made in these areas. The cost of natural gas is much lower than LPG which is now a feed stock to make plastics of all kinds.

Other applications of Frame 3 and 5 HD units

The UPRR GT-EL exercise had one bright ending and that was the fact that GE now had two HD GT models to sell elsewhere, three counting the Frame size 3 two shaft unit designed for pipeline service.

The first GE Frame 3 single shaft GT driving a generator was sold to be installed at the Belle Isle, Louisiana steam power plant in 1948. It was rated at 3500 KW and it burned natural gas as fuel. The exhaust heat was used to heat feed water for the steam plant and it was highly successful. A second 4000 KW unit was installed alongside the first one. However, this small amount of power for a large 400 MW steam plant was not very significant to the power production of the total plant. The overall efficiency gain was too small. The US electric utility companies did not take to this small-sized unit even though it functioned well and produced incremental power efficiently.

The single shaft Frame 5000 HP 3 was made into a two-shaft unit for the natural gas US transcontinental pipelines. A re-generator was incorporated into the design to improve the efficiency to 25 percent and this proved to be a real winner. In one swoop, in 1949, GE sold 28 units to El Paso Natural Gas Company to pump natural gas from west Texas to California. The unit was up-rated to 6700 HP and then to 7600 HP. A number of these units were sold to various pipeline companies whose headquarters were located in Houston, Texas and other Texas cities.

The larger 12000 HP sized single shaft simple cycle GT was now available for other applications as well. A number of these larger units were sold to Texas Eastern Pipeline Company and to various petrochemical plants and refineries along the Gulf Coast. Natural gas proved to be a good fuel in these units and they ran well for long periods of time between overhauls. They were also very reliable.

The GE Gas Turbine Division now had a way to survive by selling GTs to the pipelines, petrochemical plants and refineries. Somehow, each year, the GTD was placed on the GE corporate chopping block but managed to keep going. It was nip and tuck for a number of years and profits were low. And it was always Glenn Warren who came to the rescue.

How times have changed. Look at the large combined cycle power plants GE is selling around the world. GE is making money at last on the GT, but it took 50 years to get to this point in time. I wonder what Glenn Warren would think if he were alive today because it was this corporate GE man who had great faith in the gas turbine and kept it alive even though his pet GT-EL was only partially successful up to this point in time.

In the next part, the author talks about the GT-EL’s prospects today and why this is the right time for it to make a successful comeback.

(This article is the third part of a series by the author.)

Can the gas turbine-electric locomotive make a comeback?

How rising fuel costs forced the retirement of Frame 3 and 5 units in U.S. locomotives

Ivan G. Rice was past chairman of the South Texas Section of ASME (1974 – 75), past chairman of the ASME Gas Turbine Division (now IGTI) (1975 – 76). A Life Fellow Member of ASME and Life Member of NSPE/TSPE, he has authored many articles and ASME papers on gas turbines, inter-cooling, reheat, HRSGs, steam cooling and steam injection.