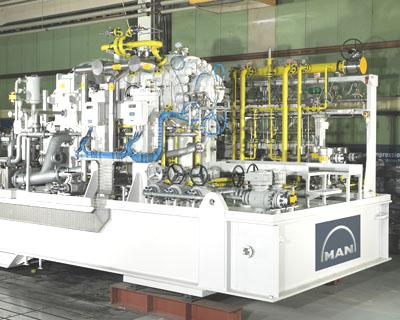 The two compression modules on board of FPSO Cidade de Mangaratiba MV24 have been successfully commissioned for MODEC, the EPC contractor specialized in engineering, procurement, construction and installation of FPSOs. After a design, engineering and manufacturing period of only 18 months, the high pressure modules by MAN Diesel &Turbo in Switzerland will be deployed on the FPSO operated by MODEC for Brazilian oil multi Petrobras, maintaining the field pressure thus maximizing oil production.

(The compressor skids were tested at Zurich)

The centerpiece comprises two RB 28-6 barrel compressor skids, driven by an electric motor. With a particularly high design discharge pressure of 550 bar, they were built and tested at MAN’s facilities in Zurich. For later deployment on board the FPSO in the Santos Basin off the coast of São Paolo (Brazil), they were transported to a shipyard in Singapore. Here they were installed under supervision of MAN personnel into two modules of 22m x 8m x 14m, each weighing around 400 tons.

After offshore pre-commissioning, start-up activities and required control systems’ checks all showed good result, the high pressure compression modules were handed over for commercial operation in December 2014 after signature of the PAC certificate.

Mathias Scherer, Senior Vice President Sales & Contracts at MAN in Zurich said the MV24 Re-Injection package is a flagship project with many parties involved: the positive results are based on the committed work of MAN’s project team and external partners as well as the intensive collaboration with the company’s customer MODEC.

MDT’s project manager Gilbcaroll Hernandez said both the modules were designed for easy integration into the FPSO thus enabling to shorten time for installation and commissioning by nearly a year, compared to conventional assembly directly on board.