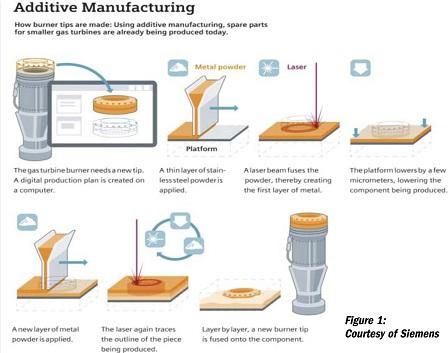 Imagine hooking up Computer Aided Design (CAD) software to a printer, hitting a few keys and out pops an entire gas turbine. While the possibilities of achieving that for a heavy frame turbine remain very much the stuff of science fiction, the technology is not too far away from making it potentially feasible for microturbines and perhaps even small turbines.

Companies such as GE, Siemens, Turbocam, Rapid Prototyping Services and others are able to print metal blades and impellers using a technique known as 3D printing (Figure 1). Most of these parts are prototypes, though some applications are finding their way into actual production parts. At its Greenville, South Carolina plant, for example, GE showed off a printed combustion fuel injector that is more advanced than any cast alternative (Figure 2).

3D printing, also known as additive manufacturing (AM), has been in commercial use since the nineteen eighties. This technology takes engineering designs and transforms them into fully functional and durable objects. Printing is done in layers with each layer’s particles bound by heat or chemicals; then more layers are added. The technique enables the manufacture of geometries that would not previously have been possible.

While not yet appropriate for high-volume manufacturing, 3D printing has blazed inroads in rapid design development and could do well in the manufacture of highvalue, low-volume products.

From plastic to metal

Thermoplastic powders and filaments, photopolymers, plaster, sand and binder have long predominated in 3D printing. Now the use of metal powders, such as aluminum, steel, titanium, cobalt chrome, Hastelloy X and Inconel 718, is growing. Emerging materials include silicone, carbon fiber, electrically conducting materials and ceramics. The total market for any and all consumable 3D printing materials was $800 million in 2013 and is expected to reach $8 billion by 2025, according to IDTechEx Research.

“The metals we’re now printing are starting to meet the structural requirements of the turbomachinery market, and are rapidly improving as the processes are refined,” said Ken Brace, Owner of Rapid Prototyping Services. “We’re able to print internal cavities for cooling that can’t be made using conventional manufacturing processes.”

Far from being a distant dream, a niche market or a matter for laboratory experiment, 3D printing is already big business. Wohlers Associates, a consulting firm specializing in this segment, reported that AM products and services worldwide grew at a rate of 35.2% in 2014 to reach $4.1 billion. President Terry Wohlers said the industry expanded by more than $1 billion in 2014, with 49 manufacturers producing and selling industrial-grade AM machines. Worldwide shipments of these machines will reach 217,350 units in 2015, up from 108,151 in 2014, according to market research firm Gartner. They are expected to more than double every year between 2015 and 2018, by which time worldwide shipments are forecast to reach more than 2.3 million.

“Shipment growth rates for 3D printers, which languished in the low single and double digits per year throughout the 30 years since the first 3D printers were invented, are poised to increase dramatically,” said Pete Basiliere, Research Vice President at Gartner.

Many of these printers are finding their way into turbomachinery applications, particularly oil and gas. Rachel Gordon, Technology Analyst at IDTechEx, stated that sales of 3Dprinters into the oil and gas industry totalled $98 million in 2014 and are forecast to reach $1.8 billion by 2025

More importantly, 3D printing has moved up the food chain. While it once was purely a prototyping and design tool, it is increasingly finding its way into the production line. Wohlers said that revenue from the production of parts for final products now represents 42.6% of the entire market for 3D printing, up from less than 4.0% in 2003.