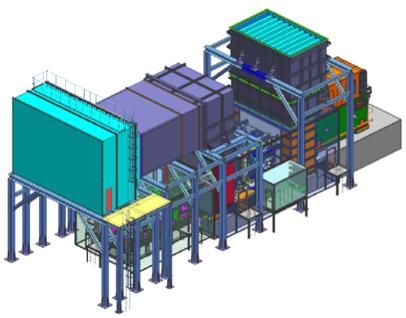 Mitsubishi and Hitachi have traditionally focused on different market sectors. Where Mitsubishi targeted large gas turbines such as the 501G and 501J, Hitachi focused on the small and medium-size market with its H-25 and H-100 (formerly known as H-80) models, often referred to as the H-series. Merger of the two companies’ thermal power businesses in early 2014 created Mitsubishi Hitachi Power Systems with products spanning from approximately 30 MW to 330 MW in simple cycle. Recent mid-size capacity additions include the H-100(110), H-50, and an uprate of the H-25 gas turbines to 42 MW.

Originally called the H-80, this gas turbine has been re-named the H-100 to better reflect its capacity class. It was introduced in January 2010, when the first unit went into commercial operation at the Shin-Oita Power Station of the Kyushu Electric Power in Japan. As of today, it has accumulated over 38,000 actual operating hours (AOH), with a fleet total of nearly 200,000 AOH and 99.5% reliability since 2010. The H-100 gas turbine components are based on H-25 technology.

It was originally designed as a replacement engine for the aging fleet of existing gas turbines of similar size, i.e., it could fit on the same foundation and within the flange dimensions of other equipment suppliers’ gas turbines. Moreover, it was designed to have about the same exhaust conditions, such that the engine exchange can be performed without modification to any existing bottoming cycle.

Of the first 20 units sold, 19 were flange-to-flange replacements at older combined cycle plants. One additional unit will be an Integrated Gasification Combined Cycle (IGCC) application with dry low NOx emissions. In order to achieve higher output and efficiency without significant changes to the exhaust conditions, the H-100 was designed as a two-shaft machine.

The high-pressure (HP) turbine shaft is driven by the first two stages of the turbine and drives the compressor, while the low-pressure (LP) turbine shaft is driven by the remaining turbine stages; it can drive either a generator or other rotating equipment, such as LNG main refrigeration compressors. The LP turbine is a free turbine and not mechanically tied to the HP shaft. A reduction gear is not required, and substantially the same design can be applied for 50 Hz and 60 Hz markets.