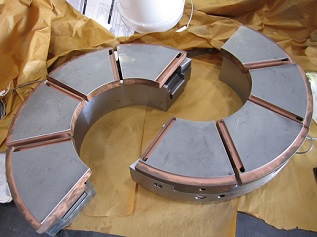 What are thrust bearings, tilting pads?

Thrust bearings are usually classiﬁed as ﬁxed geometry or tilting pad. Figure 1 shows a simple ﬂat land ﬁxed geometry bearing. The surfaces of the pads and the thrust collar are in parallel by design. Due to the lack of obvious converging wedge, this bearing is only suitable to carry a light thrust load (< 0.5 MPa or 75 psi). The source of its load carrying capacity was extensively debated in history because it cannot be explained by isothermal lubrication theory. Nowadays, it is generally agreed that it is the thermal distortion of the pads that produces small convergence in operation.

This excerpt is taken from the paper, “Fundamentals of fluid film thrust bearing operation and modeling,” by Minhui He and James M. Byrne of BRG Machinery Consulting presented at the 2018 Asia Turbomachinery & Pump Symposium.

To improve load capacity, a converging wedge needs to be added to the pad surface. Figure 2 shows a variety of ways to create a converging ﬁlm on a ﬁxed pad. Taper land and parallel taper land are relatively popular designs. In these designs, a converging taper is machined from the pad leading edge to somewhere near the trailing edge. While the taper is responsible for generating hydrodynamic pressure, the ﬂat region near the trailing edge provides a surface to set the rotor ﬂoat or position, as well as facilitates manufacturing. The shrouded taper land can be used when inadequate oil ﬂow is a concern because the shroud or rail helps to keep the lubricant inside the clearance.

Since the ﬁlm shape has to be converging, all the designs in Figure 2, except the ﬂat land, are unidirectional, which means they cannot support any signiﬁcant load if the rotational direction is reversed. The thrust collar and bearing surface should remain parallel so that all pads equally share the load. In addition, the axial runout of the thrust collar must be very small. However, when shaft angular misalignment is present, some pads will be more heavily loaded than the other. With exceedingly high load, one pad can fail due to high temperature or rub. This creates a chain reaction as the loads on the remaining pads will increase due to the loss of the ﬁrst pad, quickly leading to the bearing failure. Fixed geometry bearings, and tilting pad bearings by themselves, do not have the capability to compensate for this misalignment. Another limitation is that the bearing surface, such as the taper slope, can be optimized only for a single operating point of speed/load combination.

With misalignment, the pads that would be heavily loaded will be pushed down. Consequently, the link will push up the pads on the opposite side, keeping the bearing surface parallel to the thrust collar surface. It should be pointed out that the self-equalizing link is used to handle static misalignment from machining imperfections in the bearing and casing structure. It cannot be applied to compensate dynamic motion due to the thrust collar axial runout. The American Petroleum Institute (API) requires the use of the self-equalized tilting pad design in some machines.