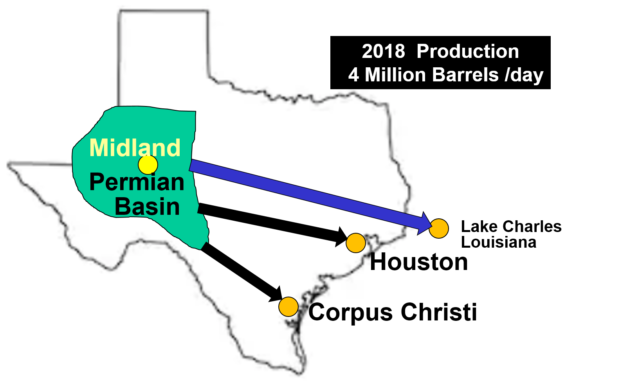 SOARING PRODUCTION IN THE PERMIAN BASIN OF WEST TEXAS IS DRIVING DEMAND FOR TURBOMACHINERY, PIPELINES AND LNG EXPORT TERMINALS
BY MARK AXFORD

The annual CERAweek (Cambridge Energy Research Associates) conference by IHS Markit in Houston during March drew attention to soaring oil and gas production in the Permian Basin of West Texas. This boom, now
in full swing, has been heralded as the “Second Wave” of the shale revolution in North America.

New fracking and drilling techniques are further reducing the time and cost to complete a well and produce a barrel of oil. The volume of associated natural gas is enormous, far beyond the U.S. domestic needs. LNG export terminals never imagined only 10 years ago are sprouting up on the Gulf Coast of Texas and Louisiana.

In the first quarter of 2019, Permian production of light crude oil exceeded four million barrels per day (MBPD) for the first time. More than 110,000 wells have been drilled there since 2010. As a result, the U.S. surpassed Russia and Saudi Arabia to become the world’s top oil producer. But current pipeline capacity cannot transport all the oil and gas to where it needs to go. Massive infrastructure investment is needed to support the bonanza. When critical pipeline projects are completed over the next couple of years, Permian oil production is predicted to climb
from 4 MBPD to 6 MBPD.

A great many gas turbines and centrifugal compressors are being ordered and built to support oil and gas in this region:
• Midstream facilities to process the associated gas and capture the valuable propane, butane and ethane fractions used for plastics production
• Trailer-mounter gas turbine gensets as a source of power at fracking sites
• Pipelines and compressor stations to deliver methane gas to customers
• LNG terminals with huge compressors to liquefy methane gas for export

Export terminals
Cheniere Energy revolutionized the U.S. natural gas business. It foresaw a vast surplus of natural gas being created by fracking and made a bold decision: change its existing LNG import terminal at Sabine Pass, LA into an export terminal.

In February 2016, the first tanker ofLNG to be exported from the U.S. was shipped from the Sabine Pass terminal. To date, more than 500 cargoes have been delivered to customers around the world. Sabine Pass has an export capacity of 27 million metric tons per annum (MMTPA). In late 2018, Cheniere began shipments from its second LNG export terminal (13 MMTPA) at Corpus Christi, Texas. The Dominion LNG export terminal in Maryland has also opened (5 MMTPA). The Freeport, (15 MMTPA), Cameron (12 MMTPA), Magnolia (8 MMTPA) and Elba Island (2.5 MMTPA) projects are under construction. More export terminals are in the advanced planning or early construction
stages.

GE has succeeded in having its gas turbines specified for most of the Gulf Coast LNG refrigeration compressor trains. The GE Frame 7EA gas turbine was selected for the largest trains, and GE also earned big LM2500+ and LM6000 aeroderivative orders for medium-sized LNG trains. Solar Mars units were selected for Kinder Morgan’s Elba Island terminal. Siemens has received an order for four SGT-750 compressor sets for the Magnolia LNG plant. Outside of the U.S., GE has been selected to supply LMS 100 gas turbine compressor sets for Canada’s first major LNG export terminal, now in construction in British Columbia.

Mitsubishi Hitachi Power Systems (MHPS) is a recent entrant into the LNG game. Its two-shaft H-100 gas turbine,
rated at 120 MW, has been qualified by ExxonMobil, Shell, Total and Bechtel for mechanical drive. The H-100 has been selected by Exxon-Mobil for a multi-train LNG liquefaction plant in Mozambique. It will drive centrifugal refrigeration compressors manufactured by Mitsubishi Compressor Corp. The Mozambique project is awaiting a final investment decision by ExxonMobil.

Mark Axford has more than 35 years of energy experience as an engineer, product manager, sales and marketing executive, and independent consultant with Axford Turbine Consultants. For more information, visit Axfordconsulting.com