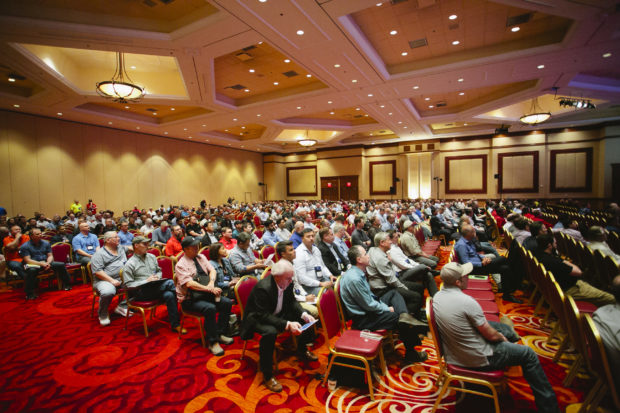 AERODERIVATIVE MAINTENANCE AND REPAIR, SERVICING HEAT RECOVERY STEAM GENERATORS, AND RAISING FLEET RELIABILITY WERE AMONG THE MANY TOPICS PRESENTED
BY DREW ROBB

Chuck Casey, President of WTUI delivered a keynote that warned about cybersecurity (Turbomachinery International, March/April 2019). Terrorists are focusing efforts on disrupting the electric grid overseas, he said. U.S. plants, therefore, have to be more vigilant. “Physical security and cybersecurity intertwine so there is no blaming it on IT anymore,” said Casey. “SCADA, plant controls, and other systems must be hardened in a tight network.”

He cautioned users not to pick up stray USBs and plug them into their systems. Contractors should be monitored, he said, as materials and software brought into facilities may be infected with a virus, especially overseas component suppliers.

Martin O’Neil, GM Aero Product Line, GE Power, said the use of GTs in grid firming and balancing of renewables was not happening at the rate expected. Still, natural gas will play a vital role in the future of the power market, he said. Planetwide, electrical demand is growing at 2% per year and will continue to do so for foreseeable future. The highest growth is in developing economies. But with 700 GW of coal and nuclear retirements due in the next 20 years, gas facilities are going to be needed.

“Aeroderivative GTs are the best complement for renewables,” said O’Neil. Power density is the big strength of GT plants. They use 50-to-100 times less space per MHW compared to renewables with energy storage. “Wind and solar will struggle to provide the power needed for mega-cities with tens of millions of people,” said O’Neil. “GE will be investing in the gas turbine marketplace, and aeroderivatives are going to be a primary focus.”

GE recommends the addition of brazed doublers to both the inner and outer seal, as well as replacement of current coil spring material with INCO X-750. In addition, adding a lug on the inner band will limit leaf-seal deflection. Combustor liner lip wear is repairable with a T800 anti-wear coating. “If the leaf seal is gone, you may need to buy a new combustor,” said Ken Ueda, Manager of the Customer Support Group at IHI Japan. “Fixing it could save you a lot of money.”

Hydraulic starter carbon seal oil leakage was also discussed. Carbon seals are used in three locations within the LM6000: the liquid fuel pump pad, the starter pad seals and the VG pump pad. The seals used as part of the starter assemblies had the most leakage. Several were found to be damaged before reaching 8,000 hours. Indicators of a problem included high oil consumption. Users should check each drain line to look for signs of leakage.

Further recommendations: replace carbon seals annually to prevent unscheduled repair; annual cleaning is recommended for starter carbon seals; and separating the drain lines corresponding to each system would simplify the oil-leak troubleshooting process. Coupling nuts on the gas-supply hose were found to have loosened in some cases. Users were advised to tighten them in strict accordance with the engine manual. To avoid leakage on fuel, oil and hydraulic hoses and tubes due to loose connections, a good tip is to drill safety wire holes in all coupling nuts. You can add locking holes and have them safety wired.

Ralph Reichert, Gas Turbines Engineer at MTU Power, covered corrosion protection. Some users had observed excessive corrosion at the Variable Inlet Guide Vane (VIGV) inner and outer case. Corrosion on the forward surface of the bolt holes was heaviest. Corrosion pits were also found on the low-pressure compressor case, disks and shafts. “Corrosion is common in these areas but varies from site to site and per operating cycles in terms of degree of damage,” said Reichert. “These areas were all exposed to inlet air, and moisture accelerates corrosion.”

The recommendation is to keep GTs dry where possible and implement the relevant GE service bulletins on humidity control of LM packages. An epoxy repair is also available as an option for aluminum cases. Low-pressure turbine (LPT) static pressure balance seal movement was the next topic to be addressed. One user reported a stall. Investigation found the cause to be static seal and rotating high-pressure system contact. When the unit tripped, excessive pressure difference pushed the seal forward and damaged the LPT static pressure balance seal and the HPT Disk Stage 2. One HPT Disk had to be scrapped and a complete disassembly in a depot was necessary for the repair. The lip of the pressure balance seal was machined in the shop to the minimum acceptable length. Another user talked about an outage that led to the LPT module being sent to a service depot for an unscheduled repair.

Disassembly showed severe damage in State 1 and 2 blades, including cracks, dents and loss of material. On the surface of the nozzle segments, splashed material was found. Analysis discovered a probe to be the origin of this material. Users were advised to conduct semi-annual inspections of single thermocouple probes.

Reichert moved on to two test runs that failed due to erratic LPT vibrations. Trim balancing was unsuccessful. Inspection of the LPT found that nearly a third of the connection bolts of Stage 3 and 4 LPT Disks were sticking hard in their bolt holes and their nuts were insufficiently torqued. A diameter check of the affected bolts did not show deviation to the manual’s limits, but all bolt holes were too small. Thermal growth and improper bolting caused looseness, which resulted in disk misalignment and the rotor spinning out of axis. This eccentricity created erratic vibrations.

“Each flange bolt hole should be checked to ensure it is the correct diameter during reassembly to avoid similar problems,” said Reichert.

Robert Smans, Senior Engineer at TransCanada Turbines (TCT), discussed engine preservation. He defined short-term preservation as less than 30 days and longterm as anything longer. If an engine is going to sit idle for more than 15 days, operators should oil any wet bearings using Brayco 599 or equivalent. They should also cover the inlet, exhaust and VBV. If the turbine is in a container, lubricate it, install a desiccant, seal it and store in a shaded area.

Caption: Spring washers are recommended to maintain tension and compression in the HRSG steam drum

An afternoon session delved into steam drum inspection and maintenance priorities for aging heat recovery steam generators (HRSG). Ned Congdon, Systems Engineer at HRST, noted that many HRSGs were built in the late nineties and early 2000s. With a typical life of 30 years, some are getting to the end of their term, and many others need serious attention.

He mentioned service and tools from HRST that could help. For example, a steam drum manway door kit includes spring washers to maintain tension and gasket compression during hot and cold cycles. This eliminates the need to perform “hot-retorquing” of manway nuts, an inherently hazardous operational procedure. Other products include the HRST Shock- Master Economizer to address tube leaks caused by excessive differential temperatures between adjacent tubes, and pipe penetration seals made of fabric.

More attention is paid to HRSGs steam drums when those maintaining them have a better understanding of their components and inner workings. Downcomers take water from the drum to the feeders. These feeders distribute water into tube panels. Evaporator panels convert some of the water into steam. The risers flow the steam and water mixture back up to the drum where steam and water separation takes place. A steam outlet channels steam to the superheater. Remaining water flows back to the downcomer.

“A water molecule can travel through the downcomer 15 times before reaching the superheater,” said Congdon. As well as performing steam separation, the steam drum provides surge capacity and retention time for the HRSG. In the case of a failure, this offers two to three minutes more time before a trip. Steam drums are also a good place to inject chemicals, and they provide a stable waterline that is used to control feedwater flow.

Most steam drums concentrate dissolved solids in drum water and those drums offer the ability to control the solids level via continuous blowdown taken from the drum. Within the steam drum are primary and secondary separators, as well as level measurement piping, nozzles, welds and manway openings. Congdon called attention to steam purity degradation that can take place over time. Typically, steam drum purity is tested only during commissioning. He recommended regular testing to ensure impurities and solids are not entering the superheater tubes.

Fouling and degradation can happen gradually in steam separators. Fouling constricts the flow path, increases steam velocity and results in reduced moisture separation. When agglomerators become about 25% fouled, they should be cleaned. Fouling can also build up in chevron final separators. If fouling is only on the surface, it is easy to brush off. But if the fouling goes deeper, it can cause serious separation problems. The session covered several other areas of HRSG maintenance. If instruments show a high drum level, this could be due to problems with level transmitter calibration, or compensation calculations could be incorrect.

Congdon advised users to continuously monitor saturated steam and to sample different nozzles if multiple parallel pipes are carrying the steam flow. Drum-level piping is critical for reliable drum-level indication, he said. Sensing lines, for example, can plug with debris, which creates errors. Corrosion of small diameter external piping can cause a forced outage. “Inspect drum level piping for corrosion,” said Congdon. “Inspect under the insulation blankets and use blankets that shed rainwater.”

For HRSGs being cycled on and off regularly, a higher incidence of weld cracks Insulation blankets inhibit corrosion by preventing water ingress is likely due to the temperature differential. The saturation temperature increases most rapidly at low pressure, so a cold start has much more potential to cause drum shell damage than a hot start. “A thick cold drum plus a fast pressure ramp rate generates stress at the large nozzles, which are often attached to the drum wall with partial penetration welds,” said Congdon. “Users should demand full penetration welds, not partial penetration welds.”

To inspect the welds in a steam drum, the basic steps are:

• Gather the various drum drawings and design documents. This should include nozzle weld details for the high-pressure drum, if possible

• Calculate the minimum wall thickness, as well as the shell and head material thickness

• Develop weld repair procedures prior to the outage

• Be ready to perform a quick “Fitness for Service” evaluation to help decide whether weld repairs are needed now or can wait until a future outage.

A thorough visual inspection should be done with the drum drained so you can see everything. Do not leave any puddles as this can obscure cracks. Magnetic particle testing and dye penetrant testing are also recommended.

Davi D’Elia Miranda, Turbomachinery Consultant at Petrobras, lectured on how to improve the reliability and maintainability of GTs as part of fleet management. He noted that his approach does not necessarily represent the views or policy of Petrobras. He suggested a risk-based maintenance methodology with two key features:

Fleet management may be improved in various ways:

• Simulation-based-optimization of the number of spare engines. This should account for factors, such as spare engines acquisition cost, maintenance cost over time, average net present value of the investment, and degree of organizational risk

• Calculating the probability of occurrence of failure modes

The WTUI show will be held in Long Beach, California from March 29th until April 1st of 2020. For more information, visit wtui.com